There are times in life when we find things we don’t even realize we are seeking. This happened to me just a few days ago- in London. I found The Bard- the most famous of all writers. He was living in a tiny metal shop owned by a wheeling and dealing Asian man in Covent Garden. I saw Little Willy Shakespeare and knew at once that I would have to take him home…

I arrived in London after an overnight flight on Virgin Atlantic airways. As a first-time passenger on Branson’s renowned fleet, I was impressed from the time I stepped on board. The music piping through the speakers was reminiscent of my teen years in the 1980s. The Violent Femmes and the Clash were just a few of the “boarding tunes” we enjoyed as we found our way to our seats.

On the bus ride into the city center, I enjoyed the scenery as we hugged “the embankment ” which runs along the Thames River. We drove past Cheyne Walk, a place where many famous people, including Mick Jagger, have lived. The houses of the rich and famous in the area are marked with blue circle plaques baring their name.

We stopped in Westminster for lunch, and took our sandwiches to the Victoria Embankment Gardens, where we sat and enjoyed lunch with the locals. Thankful to be able to eat wheat and dairy again, I enjoyed my tomato and cheese sandwich, which I picked up at a local sandwich shop just around the corner.

The park was an interesting array of untouchable green space- with signs warning visitors to stay off the grass… and sloped, shaded areas where sitting was permitted. There were areas with deck-chairs, but they were all occupied. The literary nerd in me was also thrilled to notice a Robert Burns Memorial in the park. (Burns is the “To a Mouse” poet perhaps most famous for one line: “The best laid schemes o’ mice an’ men / Gang aft a-gley”).

After our relaxing lunch we found free bathrooms in a McDonald’s, and continued our sightseeing. We passed a bank called Coutts, which is London’s oldest bank. This bank is the very keeper of the royal money, so I’ve learned… often referred to locally as “the queen’s bank”. My mouth dropped when Simon, our tour guide, told us that one must have a $1.5 million minimum deposit to open an account at Coutts. WOW!  I’m sure the service must be simply impeccable… 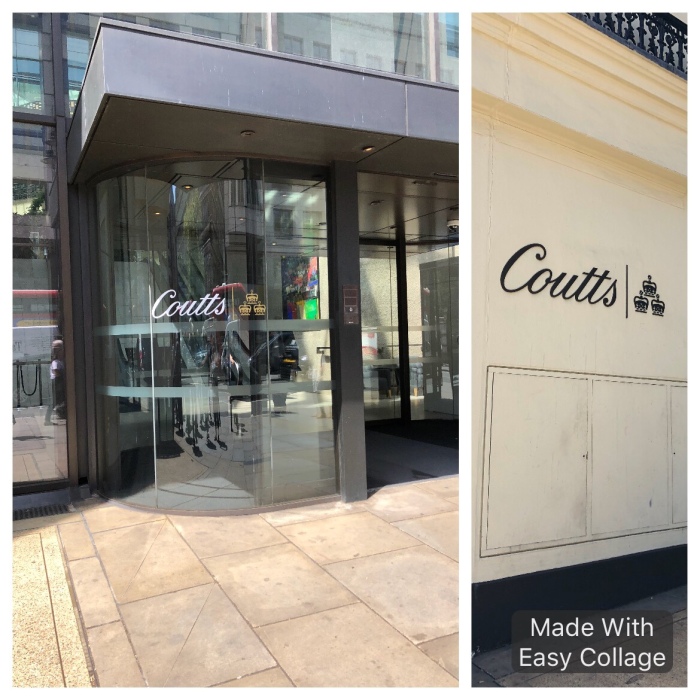 We also stopped to gawk at the 1600 seat Odeon cinema, which is allegedly the largest in the country. The Odeon is where all the major premiers take place- box office smashes including the likes of Harry Potter and Avatar.

Trafalgar Square, named such in 1830, was next on the agenda. This famous square located outside of the National Gallery, named for Admiral Nelson’s Victory in the 1805 Battle of Trafalgar, boasts Nelson’s Column, a famous fountain, numerous statues, and four lions set to guard the column.  We wandered past the giant lions, which were brought to the square in 1868. They were designed by an artist named Edwin Landseer, who allegedly took great care to make them as true to life as possible. According to “The Londonist”, however, there was an error to his work. “In real life, lion’s backs are convex, and not concave, when lying down.” (londonist.com) This faux pas is certainly not an error that the average Joe would notice.

I enjoyed the local entertainment from the musicians to the chalk artists. The floating Yodas were still hanging around, reminding me of my last visit with my family who were fascinated by these guys. 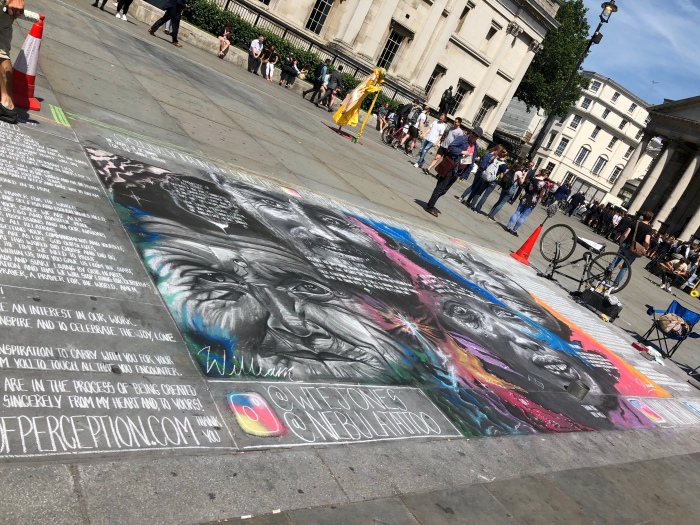 With a bustle the likes of Time’s Square, Piccadilly Circus was our next stop. Stephanie, one of my travel buds, got a kick out of “Mr. UK” who was boogie dancing in the entrance to the largest souvenir shop in the area…

Our next stop was at the historical Covent Gardens, on London’s West End, where we had time to snack and shop. The shopping and eating mecca actually came to be back in 1654, and thrives today as a popular place for tourists and locals.

Walking past the flower carts, I imagined Eliza Doolittle holding a bouquet, trying to earn a tuppence… and the crabby and arrogant Professor Higgins muttering, “I have created this thing [Eliza] out of the squashed cabbage leaves of Covent Garden…”  As a veteran British Lit teacher, I was delighted to be in this place. 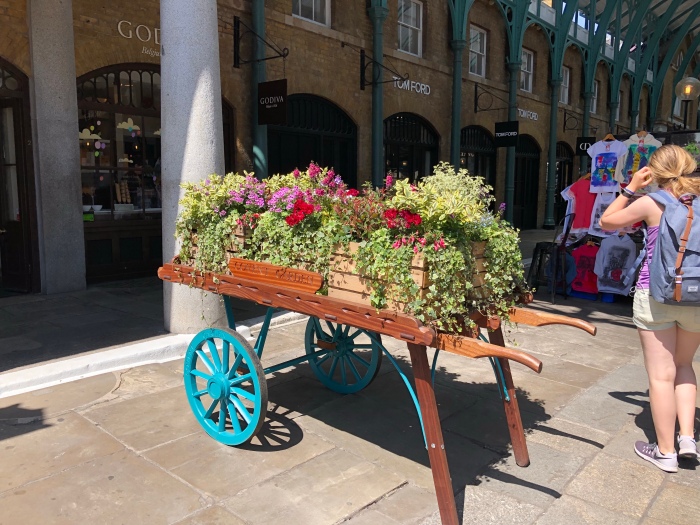 As I wandered across the cobblestone piazza, I stopped to watch some street performers acting out a dramatic “chase scene” in front of St. Paul’s.  I stepped into the famed “Apple Market” and enjoyed checking out the wares of local vendors- jewelry, crafts, and art.  I wandered my way to the Far Eastern edge of the area to a market area called Jubilee Hall Market. It was here that I found my trip’s treasure, tucked high on the shelf of a tiny booth run by an ancient Asian man. The three inch Bard is made of solid brass. I was thrilled to talk the seller down from twenty to twelve pounds. Little Willy was the perfect size to fit in my pocket, and I walked away knowing that he would be happy in his new home in America…

There was some great entertainment inside the covered area of Covent Gardens… and I stopped to enjoy for a little while… I talked to a local guy about the performance, and learned that the people who perform in the gardens actually have to audition- it is not just a free for all!

London is such an entertaining place in which to wander. The humor of the Brits plays out all over the place- a wit I never tire of…

One of our dinners in London was at a Turkish restaurant called Bistro 1, where I had a delicious Falafel and hummus dish…  Another dinner was at an Indian restaurant called Salt’n Pepper. According to our guide Simon, the Brits thrive on Indian cuisine- it is very much a part of the British culture. The food was set up buffet style and was mild and tasty- there was a curry chicken dish and a spinach vegetarian dish- both with rice. I couldn’t stop looking at the beautiful lights decorating the place. I would really love to have one of these beautiful lanterns…

Our second day in London kicked off with a visit to the Tower of London. I was excited to get a chance to return to this place after neglecting to purchase a medieval goblet whence I was here last. I thought about that goblet for two years. As luck had it, the goblet, a replica of King Theobald’s actual chalice, was still available in the Tower Shop, and will now be enjoyed by me for years…

The Tower of London is a fascinating place to explore. This time, I spent time reading about the torture chambers and checking out the prudent armor worn during the reign of King Henry the VIII… (I think the photo speaks for itself).

We ate lunch outside at a place called Argeant’s, next to the Tower Bridge along the Thames. Last time I was in London, I enjoyed their fish and chips and mushy peas, and the quality hadn’t changed a bit!

After lunch, we were scheduled to enjoy a walking tour. Blimey! Our guide for this was a local chap who seemed to have forgotten that we had head sets on so he could easily share all sorts of Interesting tidbits. Much of the walking tour was spent just walking- and listening to air!? Where were the interesting stories? Where was the trivia??

Once the underwhelming walking tour was completed, we continued walking with our far more knowledgeable Simon, who pointed out some interesting morsels including China town, the flag-laden route of the queen, the bird keepers cottage, and the home of Prince Charles and Camilla… which is behind the iron fence in the photo… 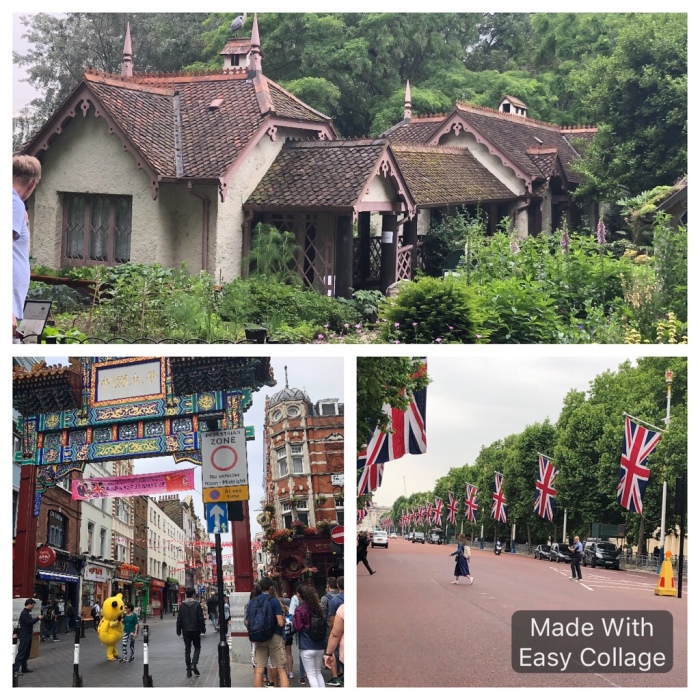 I was impressed with the traffic lights in London… in honor of Pride Week, the city had some of the lights portraying two little green men!

Abbey Road was our first stop on our last day in London. Fans flock to the crosswalk where the Beatles photographed their studio album- Abbey Road- and I, a Beatles fan myself, was thrilled to have the opportunity! The road is a busy street, and there is no way to get a photo other than to wait for a lull in the traffic. Once the opportunity strikes, the “crosser” must act fast and hope that whoever takes the photo was accurate. I enjoyed tracing the steps of George, Ringo, Paul, and John, as well as seeing their recording studio. 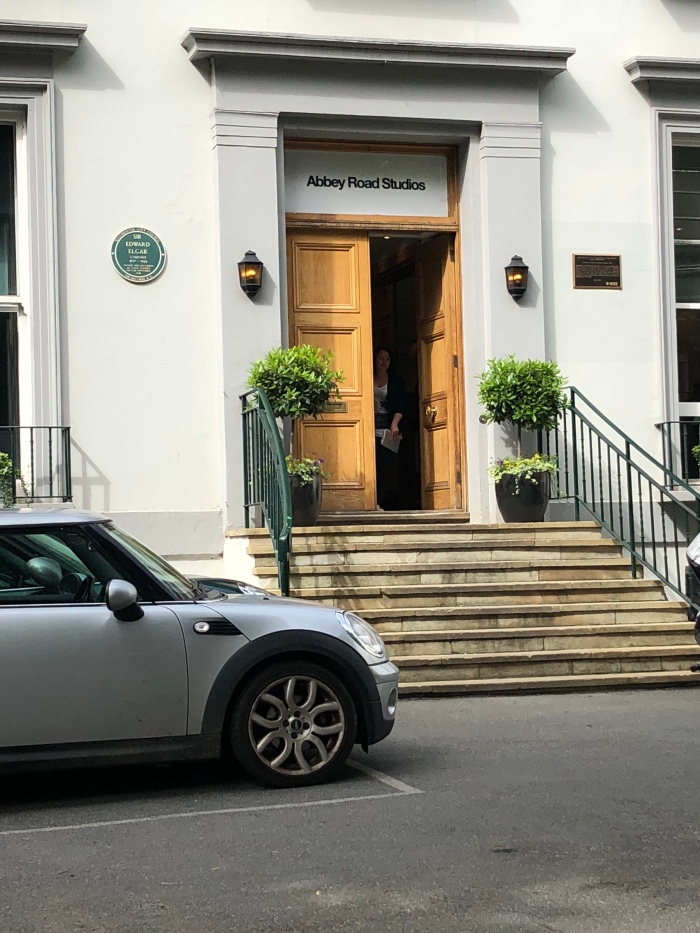 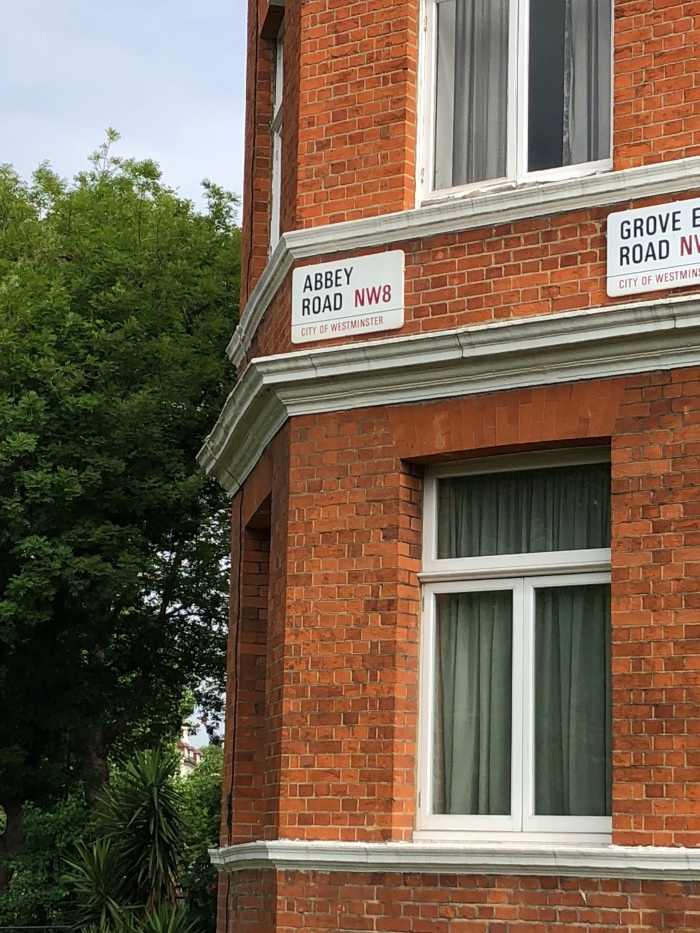 We walked to Buckingham Palace next, to watch the changing of the guards. On our way there, we had the incredible luck of seeing the Queen drive past us in her maroon Bentley! She was dressed in a hot pink suit with a matching hat.

Just before my time in London was up, I got the opportunity to wander through the National Gallery. I enjoyed the impressionist exhibits and especially enjoyed post- impressionist Van Gogh’s work. (If you ever want to read an amazing account of Van Gogh’s life, check out Lust For Life by Irving Stone!) 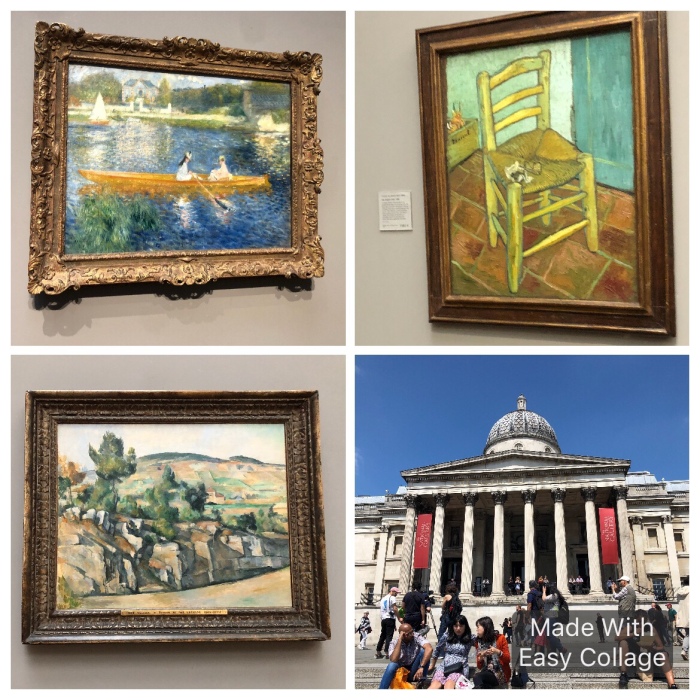 London was exciting and it was bittersweet boarding the Eurostar train. I was, however, excited to visit my favorite city in the world next: PARIS!