We woke up, enjoyed a buffet breakfast at the Ibis, and loaded a coach bus for a guided tour of Barcelona. Our tour guide Marina was amazing- she engaged all of us with her natural pep and excitement for her city. Our tour took us past all sorts of beautiful sights and amazing, unique architecture. We drove past the Barcelona Olympic Stadium, built for the 2002 Olympic games, but couldn’t go in; it was closed to prepare for the “Monster Truck Rally”. 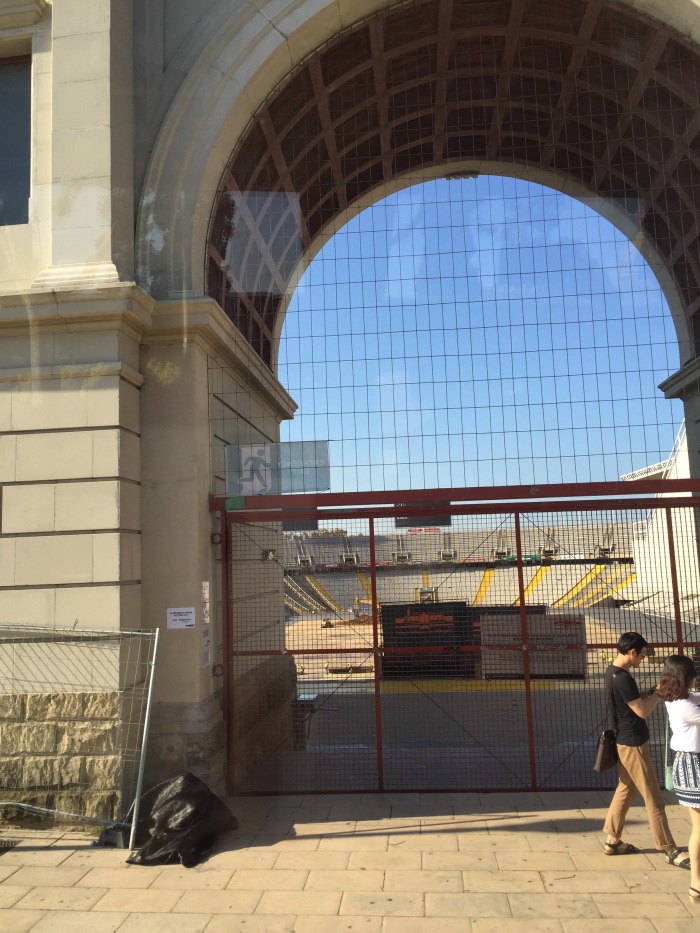 We passed what was once the city bullring- The Arenas de Barcelona- a beautiful, round structure made of brick. Bullfighting, according to Marina, “is no longer popular and no longer allowed in our city. The building was closed for twenty years, but reopened now as a shopping mall.”

We passed by the monument honoring Joan Miro, one of the renowned surrealist artists of Barcelona. The art in this town is simply magnificent. I would love nothing more to decorate my entire house in a Barcelona-inspired manner- but I’ll write more about this when I get to my “Gaudi” praise! 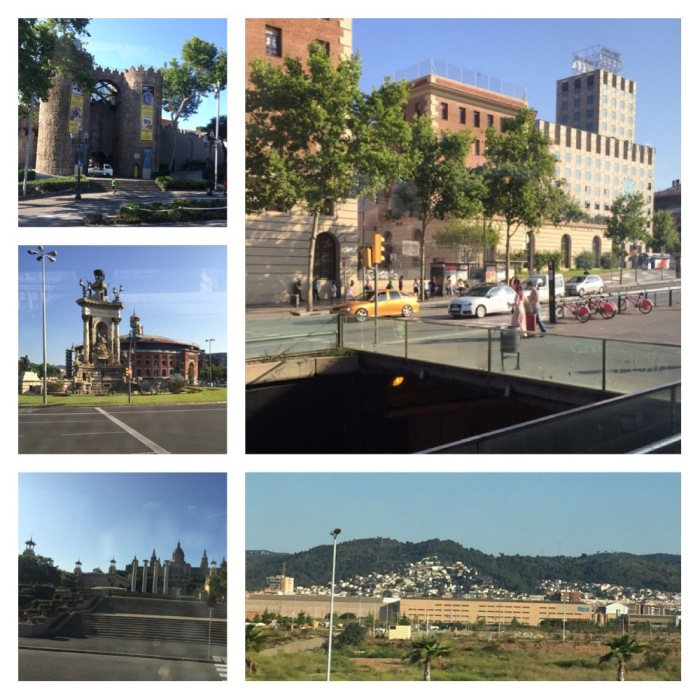 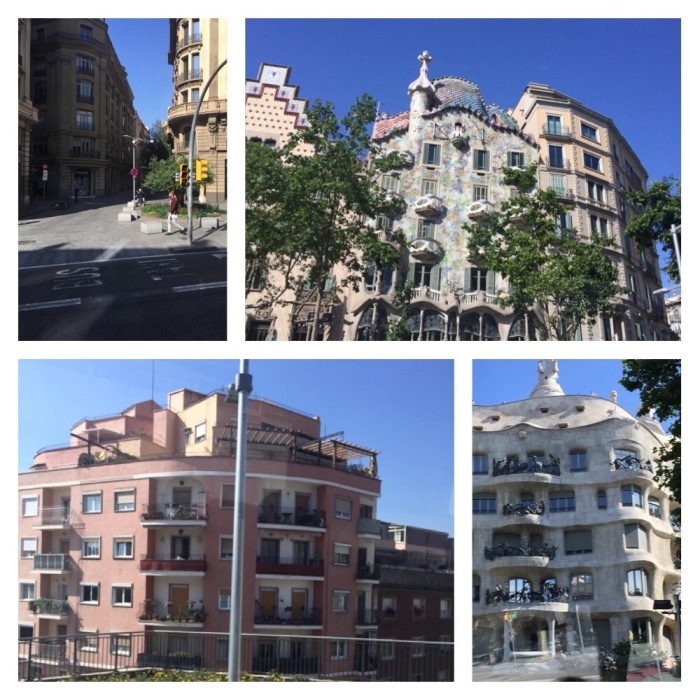 As we made our way up the winding road, to the top of Montjuic, we looked to the docks and saw the world’s largest cruise ship, the Harmony of the Seas, carrying 6,000 passengers and 2,000 employees, in port. Even from the top it was massive!

Our first “get off the bus” moment was at the top of Monjuic. The view was spectacular- we could see all of Barcelona- the city, the port, the Mediterranean coast, and the Pyrenees boarding the city. 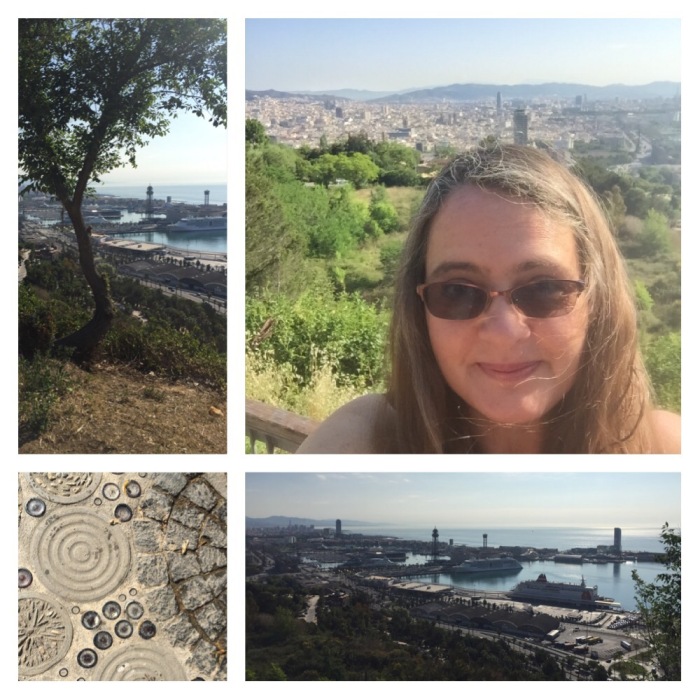 The next stop was the Park de Guell. This park, designed by Gaudi, was on the top of what was once, according to our Marina, “the Muntanya Pelada (bare mountain). Guell hired his friend Gaudi to design a community for the well off on this land that he acquired. Gaudi really outdid himself, and loved the area and moved there himself in 1906.”  We were able to wander leisurely through this park, which has winding walkways that take the visitor through the architecture of Gaudi. A winding tile bench runs the perimeter of the “great square”, where visitors can soak in the sights. Gaudi’s work is both breathtaking and magical. The buildings are enchanting, and seem to literally sparkle as though they were topped with glitter!  One of my favorite parts was Gaudí’s  mosaic salamander, which Marina told us was called “el drac, which means ‘the dragon'”. This salamander was printed up on nearly every tourist item in every shop in Barcelona. 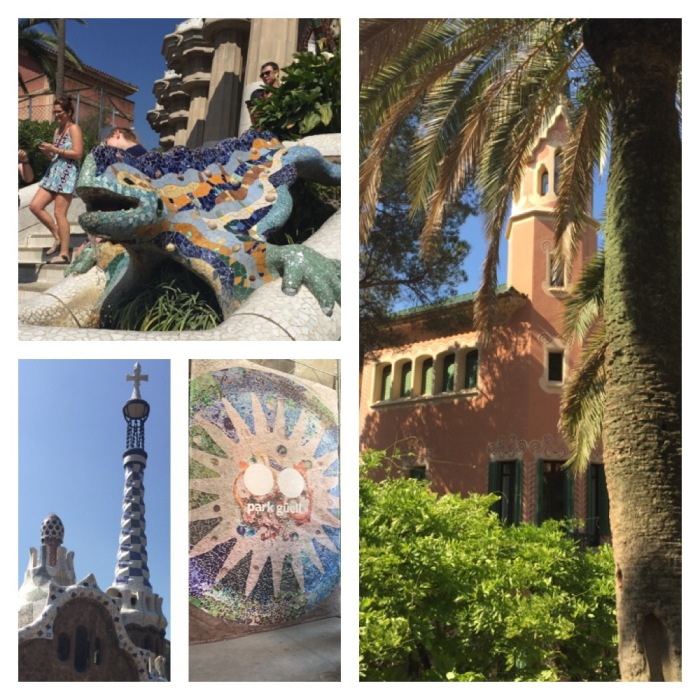 As if things couldn’t get any more amazing, our next stop was at the “piece de la resistance” (I know- wrong city for that descriptor)… the Sagrada Familia- Barcelona’s most renowned (and only) Basilica. When Gaudi was a mere 31 years old, he became the lead architect on this project, mixing his modern flavor with the neoclassicism of the original designs to create something truly unique and honestly spellbinding. Gaudi, who died after being hit by a train at the age of 74, is buried in the Sagrada Familia. This Catholic church, whose name literally means “the holy family” is still only 70% finished. According to Marina, “the city plans to have it completed by 2026, so you must come back!” 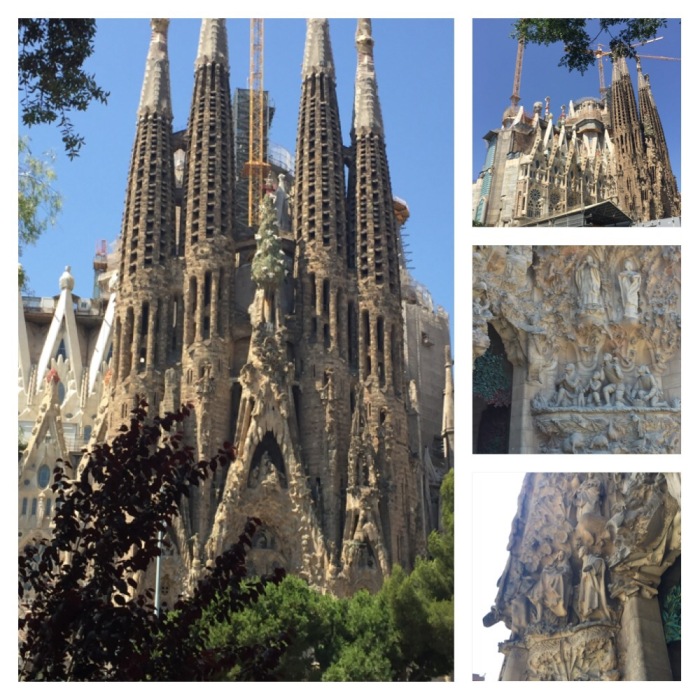 Inside the basilica, there are 52 columns which represent the 52 Sundays in a year. The stain glass windows bring in all the colors of the spectrum and run the entire length of the church on both sides. The architecture of the building was evidence of Gaudi’s genius- he used a whole host of geometric inspiration- lots of “oids”- in his constuction: hyperboloids, paraboloids, helicoids, ellipsoids, and conoids to name a few! The man was truly the definition of genius. 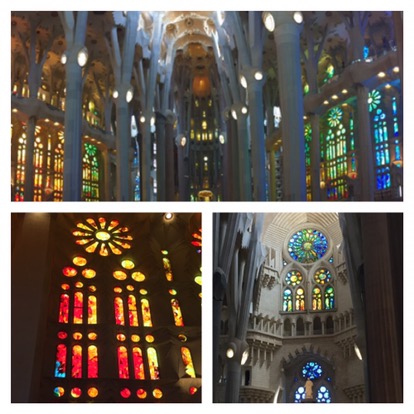 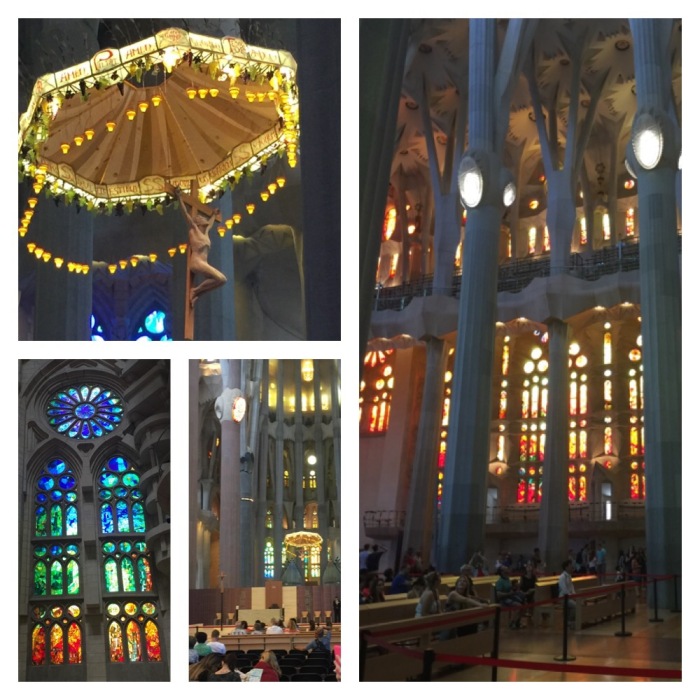 After leaving the basilica, we ventured to La Rambla, which is the most famous street in Barcelona. The street has a center section dedicated to artists, florists, and street vendors, while the sides host hotels, shops, and restaurants. There were fascinating sights as well as things that made me do a double take… like the shops selling garden seeds- “penis peppers”, “titty melons”, and other more “adult themed” seeds. The kids were even blushing as they looked at these crazy things! 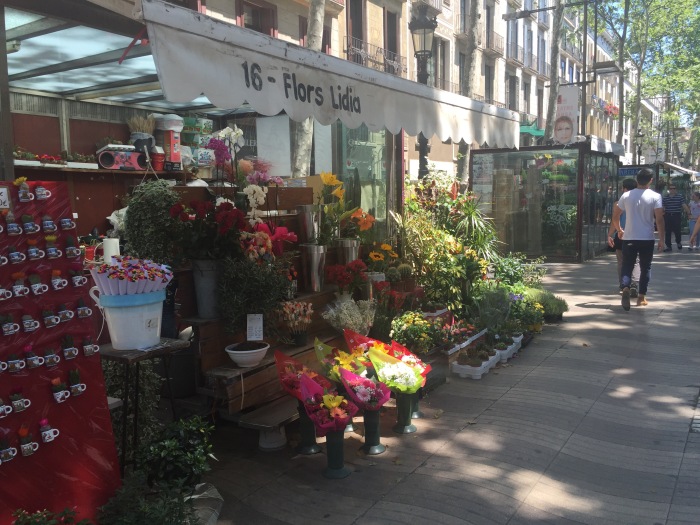 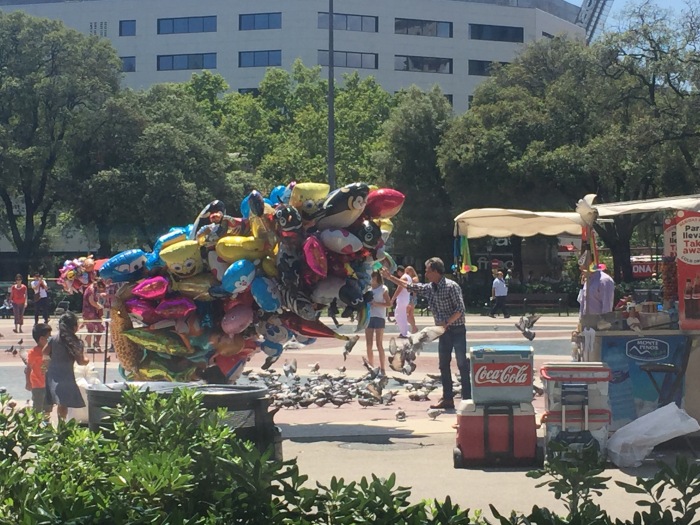 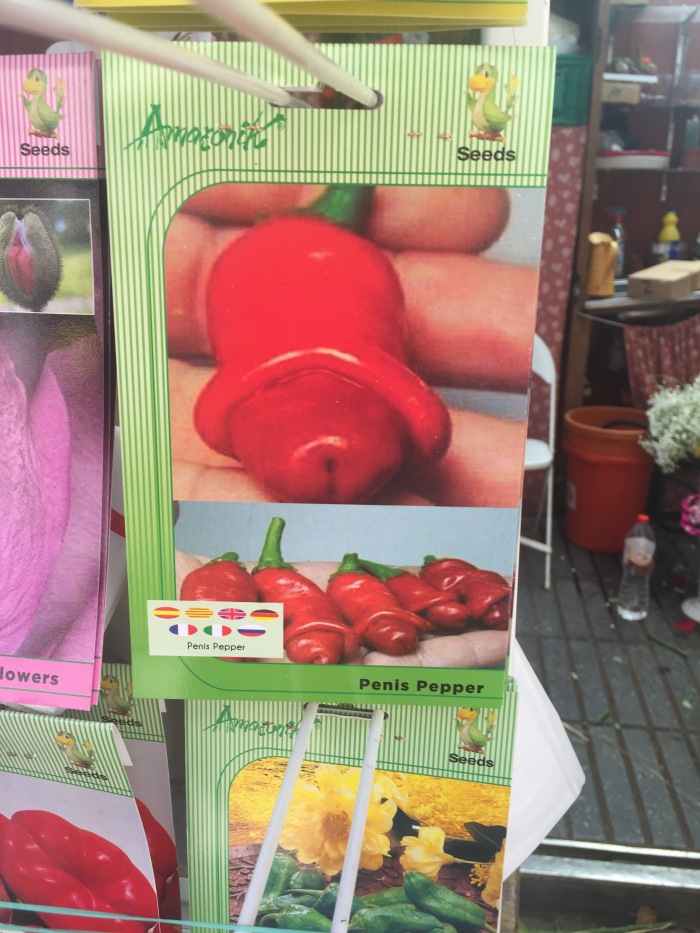 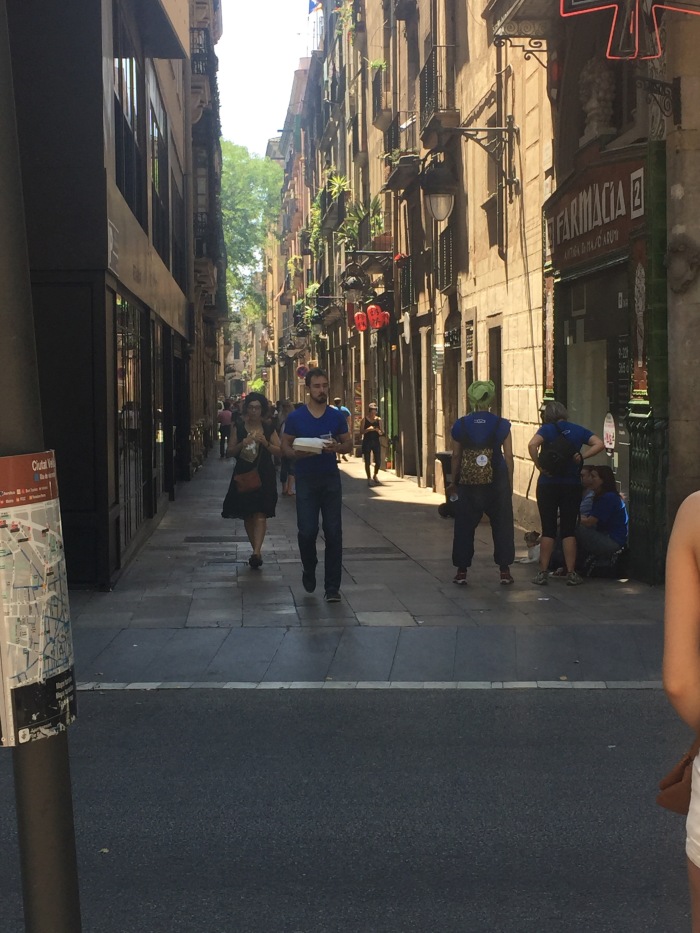 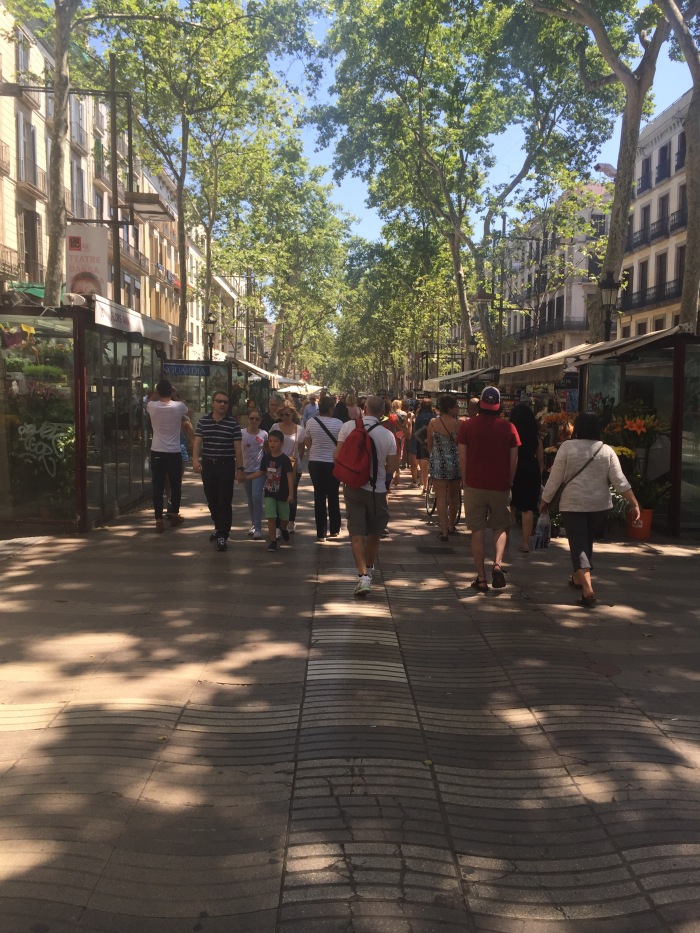 We were on our own for lunch, so my roommate and I opted for the Cerveceria- a place where we could share several different “tapas”- and enjoyed squid, peppers, cheeses, and some sort of chutney-mango chicken inspired sandwich! Our waiter was a character- dressed in a bowtie and moved like Dick Van Dyke in Mary Poppins. 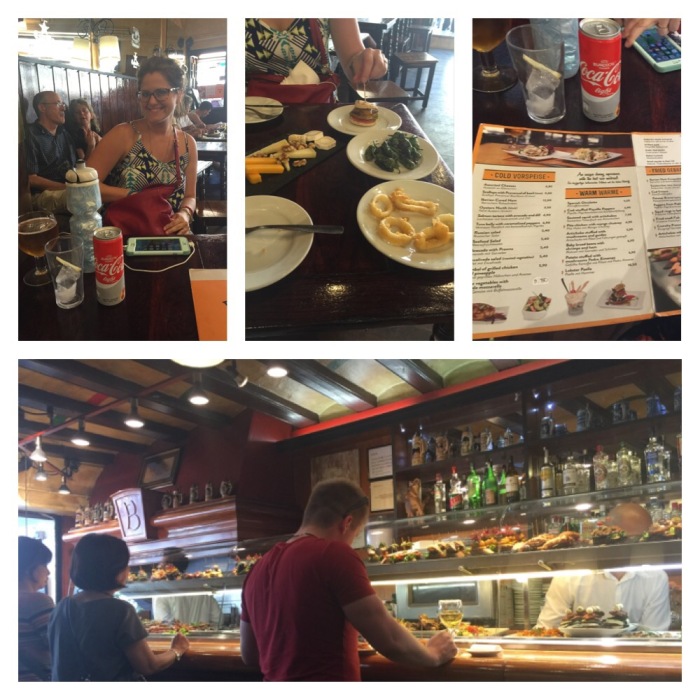 After lunch, we walked the remainder of La Rambla, and made our way to the beach. We enjoyed wandering past the street vendors, and I couldn’t resist purchasing a Spanish tapestry, which we were able to use as a beach blanket as we enjoyed the rest of our afternoon on the beach of the Mediterranean! 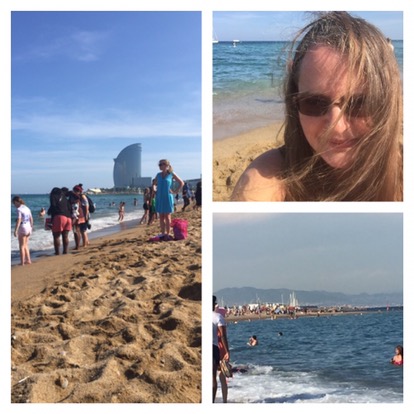 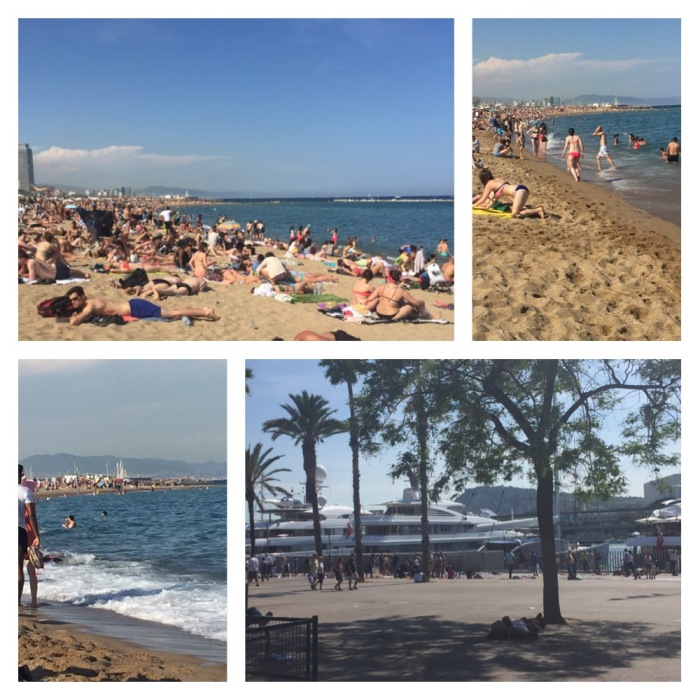 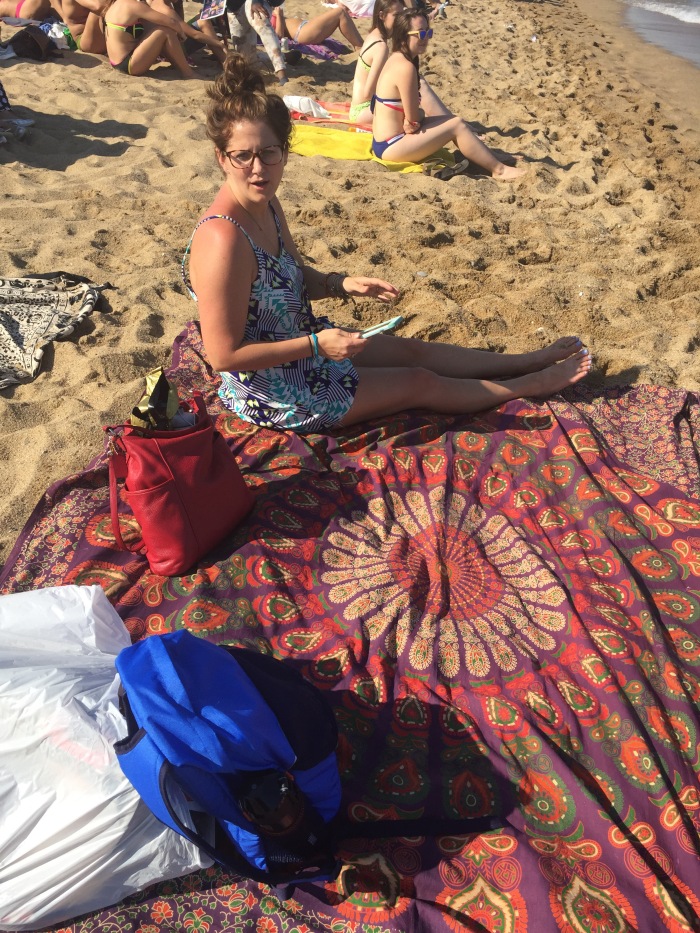 We were exhausted by the time we took the hour-long train ride back to the hotel. With 23,000 steps on my fitbit, it was clear that we had “seen the city” with gusto.  I am completely in love with Barcelona. This may be the first place I return to if I should ever get the opportunity- I was mesmerized.