Skulls and femurs and bones, oh my! Our last day in Paris 2017

Some folks like to begin their day sipping slowly from a cup of coffee… we, however, preferred to wake up amidst the femurs and skulls of 6 million dead Parisians.

We opted to skip my original plan, which was to ride the elevator to the top of Monparnasse- the tallest skyscraper in Paris, in order to catch up on some sleep. (The view from the top might have been redundant since we already took photos atop the Eiffel Tower)! We did not, however, intend to sleep until 10:45am! The hotel’s electricity had been out all night, and not only did we not get our wake up call, but none of our alarms went off- again! Our tickets for the Catacombs, pre purchased online, were from 11:00am-1:30pm. We didn’t have any idea if that meant we had to be there at 11:00am or if that was just a range. My optimism began to sing my favorite raegae tune… “every little thing… is gonna be alright…” a tune I tend to sing to myself in times of worry.

Once again we found ourselves flying out of the hotel toward our metro station.

When we arrived at the Catacombs, the Denfert-Rochereau stop on the metro- we saw that the line to get in was wrapped around the next block. With a sinking spirit I took our tickets to the man at the door to inquire about whether or not we should get in line or if we were too late. He looked at our tickets, unlatched the canvas barrier, and motioned for us to enter! Perhaps the curse of our comedy of errors was nearing a finish! The fates were on our side!

We entered, put on the headsets provided with the self guided audio tour, and descended the winding stairs- hundreds of them, spiraling down, down, down! We ended up what seemed like like miles below the bustling Paris streets, where we began to follow the winding passages leading to the ossuary. As we approached the halls of the dead, a sign warned, “Arrete! C’est ici l’empire de la mort!” (Stop! This here is the empire of the dead!) But how could we stop now? Isn’t morbid curiosity inherit in all humans? We had to press on and witness the bones of over 6 million dead Parisians.

The tunnels were used, from 1786-88, as a nightly depository for the dead. The cemeteries of Paris were filled beyond their rims, so the tunnels below served as a convenient final resting place for these poor souls. Years following the body build-up, the bones became a tangled mess- falling all over visitors and even occasionally blocking an entrance.

Finally, in the early 1800s, the Paris Authorities decided to organize the underground mausoleum. Workers spent months sorting and organizing the bones. They stacked them in patterns and rows- sometimes even making heart shapes with the skulls. According to the informative “audio tour”, they have to realign the bones here and there as some settle and fall out of the walls. I was thankful I wasn’t knocked out by a falling femur.

The walk back up the winding stairs was brutal, but, after what we’d seen, we were happy to be granted another day of life on earth!

After finding the “sortie”, we wandered down the street, where I happened upon a tailor who was willing to fix the strap on my backpack for two euros. He spoke no English, and it was rewarding to use my years of French classes to speak with him! His shop was a tiny place- not much bigger than a closet, and he put my bag’s strap into his sewing machine and had it secured and good as new in minutes!

At this point, we hopped back on the metro and headed for the Arc de Triomphe, at the top of the Champs Elysees! We got a family photo, then began to wander down to the Rue de la Paris, just outside the Tuillery Gardens. As we meandered the famous Champs Elysees, we watched a gypsy play her game on a poor gal. The clipboard-toting gypsy approached the unsuspecting gal whilst her partner in crime reached in the victim’s bag, grabbed a wallet, and ran! It happened as quick as a wink! I was glad I had taken the extra precaution of using a luggage lock on my little day back pack!

After wandering in and out of a few places, we stopped at a crepe stand in the Place de la Concord to enjoy crepes and a drink and watch the people pass us by. Once we were refueled, we headed past Le Grand Palais and over the bridge toward Les Invalides. Inside the gates, we passed oozie- toting guards and purchased our tickets to visit the Musee de l’Armee, home to over 500,000 artifacts dating from the the 12th century up to World War II. I was thrilled to see- close-up- the chainmail armor worn by the Anglo saxons- described in such detail in Beowulf. I also enjoyed the weapons, armor for even tiny kids, and paintings of ages and ages of historical battles.

The exhibits were amazing and ended in the famous gold-domed Invalides- which is home to the tomb of Napoleon. The tomb is massive and symbolizes the enormity of this tiny man’s place in French history. Visitors can look down to it from the main level or walk below for a closer look.

After leaving Les Invalides, we made our way back to the Champs Elysees, and continued to the giant Paris ferris wheel. (While nowhere near the enormity and height of the London Eye, I prefer its more intimate feel) There was no line, and we enjoyed pointing out all of the easily recognized Paris landmarks. 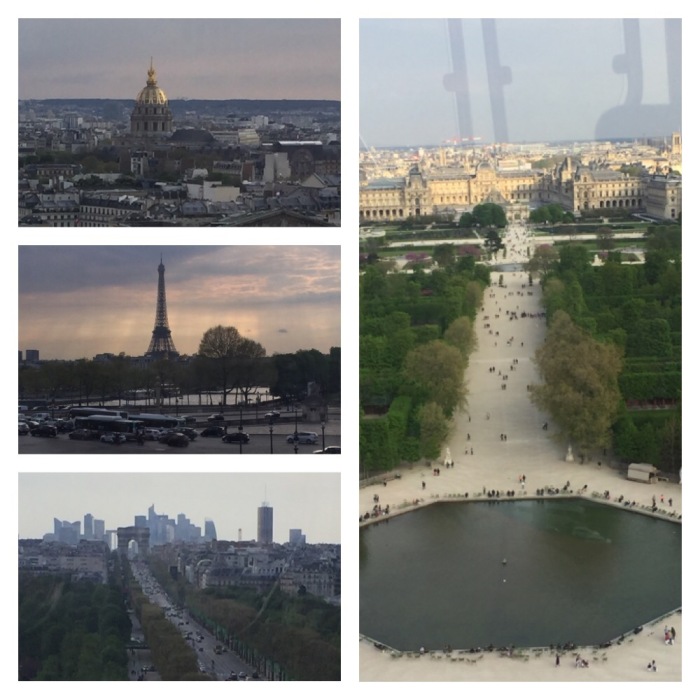 Behind the Rue de la Paris were a few little trinket shops and a macaroon stand. I insisted that everyone try a Paris macaroon. We bought six- raspberry, caramel, mint, mint chocolate chip, and two Nutella. I could not BELIEVE that I was the only one who enjoyed them!? 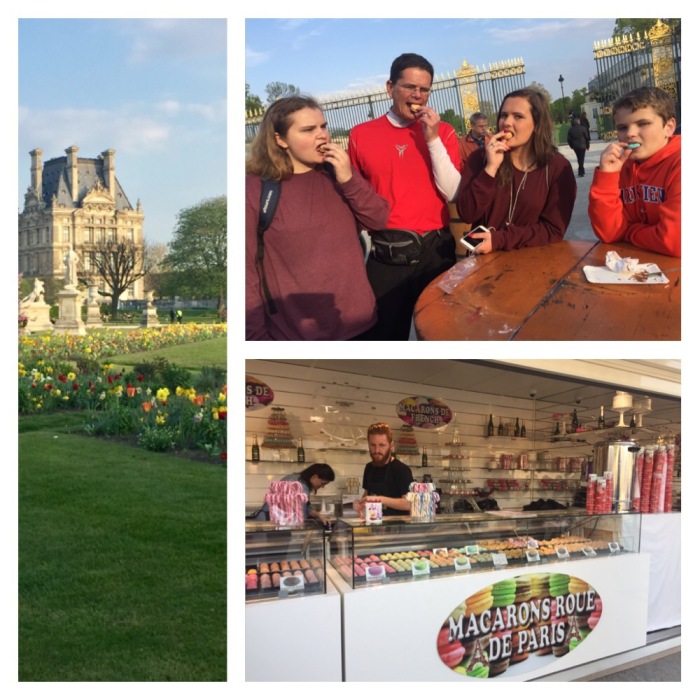 We wandered through the Tuillery Gardens and back up to the Louvre, enjoying the beautiful daffodils and tulips lining the walkways. Ahhhh… Paris in April.

We caught the train to Bastille- where I thought we would be able to see some sort of rebuilt fortress!? All we saw, however, was the monument marking the famous “Storming” that the French celebrate each year! I was glad I had not made this a bigger deal in our day!

Our final supper in Paris was quite memorable. We all enjoyed wine and fromage… and watched as Jim ate an entire plate of “Steak Tartar”… which is pretty much a raw hamburger topped with a raw egg and raw onions. Wow. Gross.

We took the train back to our hotel, walking past the Gallery de Lafayette which was a block down, and tucked in for the last night in France.

Heidi A. Campbell Teaching high school English and Journalism has certainly shaped who I am. I like to think it keeps me relevant- hip to what's what. I was born and raised in Maine, and I never miss a summer on Birch Island, a beautiful place on Casco Bay between Harpswell and Brunswick. I moved south and got my B.A. in English from Oglethorpe University in '94. Several years later, I returned to the world of academia with a stint at UGA, where I received my M.Ed. I have a great family. I love comfortable shoes, good books, poetry, traveling, music, cooking, and antiques. I rent space at a local antique shop, a perfect outlet for my passion for old treasures! I enjoy my local book club, I sponsor my school's Debate Club, and I advise both my school's newspaper and Lit Mag. I am a Feature Writer for "Our Town" magazine, I recently published a study guide and teacher's guide to accompany Rennie Curran's book "Free Agent", and I freelance as copy editor for a local doctor's office. My experiences and interests bring me into contact with an amazing variety of people and places. Sometimes, these people and places inspire, sometimes they enrage, and sometimes they change who I am. I love every minute. This blog is for those times when, in the words of Cat Stevens, "I can't keep it in... can't hide it and I can't lock it away..."
Published April 10, 2017April 10, 2017

One thought on “Skulls and femurs and bones, oh my! Our last day in Paris 2017”