I’m a sucker for gargoyles. I know that my affinity for these little winged gutter spouts would not be the desired response of the cathedral builders, but I find them irresistible. I told myself, as I neared the city, that I didn’t need to buy any Paris goodies since it was less than two years since I last visited my favorite city. I knew, however, as soon as I saw the tiny, spitting gargoyle, that he would have to join my growing flock of gargoyles at home in Atlanta. In the early days of Notre Dame Cathedral in Paris, many believed that the gargoyles scared away evil spirits. If this is true, why WOULDN’T I want to line my house with them? can one ever have too many gargoyles?

We arrived in Paris on the Eurostar train from London. Once we got on board, the trek was swift and seamless. Getting on the train with all of our luggage, however, is a major hassle. Hoisting my suitcase up the stairs practically killed me, and I had to schlep it to another train car because the one I was assigned was completely full. Needless to say, if you travel by train- less is best.  It was interesting to

We left the train station by coach bus, and rode into the city. I felt a smile working it’s way out of my soul as we made our way into my all-time favorite city. There is a special vibe in Paris that just sits right with me. It is like no other city. I don’t know if my love of Paris stems from my French roots or whether it is my love of the food, music, and art- but there will never be a day when I’d turn down a trip to Paris.

We passed by all sorts of wonderful landmarks-des Champs-Élysées, the Arc de Triomphe, and the Dome Des Invalides & Tomb of Napoleon. For some reason, I can’t see the Champs Elysees without breaking out into song… “Oh… Champs-Elysees!”. (Later in the trip I irritated Simon by singing “Istanbul was Constantinople” each time he spoke of Turkey.)  We got out of the bus along the backside of the Place de Trocadero, and were able to get some beautiful (and comical) photos of the Eiffel Tower. It was a bit hazy, but we were happy that the predicted rain stayed away.

We walked back to the bus and I noted the trash cans that contain clear bags. These trash cans were the solution to keeping bombs out of trash cans. Some cities have simply pulled trash cans all together- seems like this is a better way of keeping the streets clean- and safe! 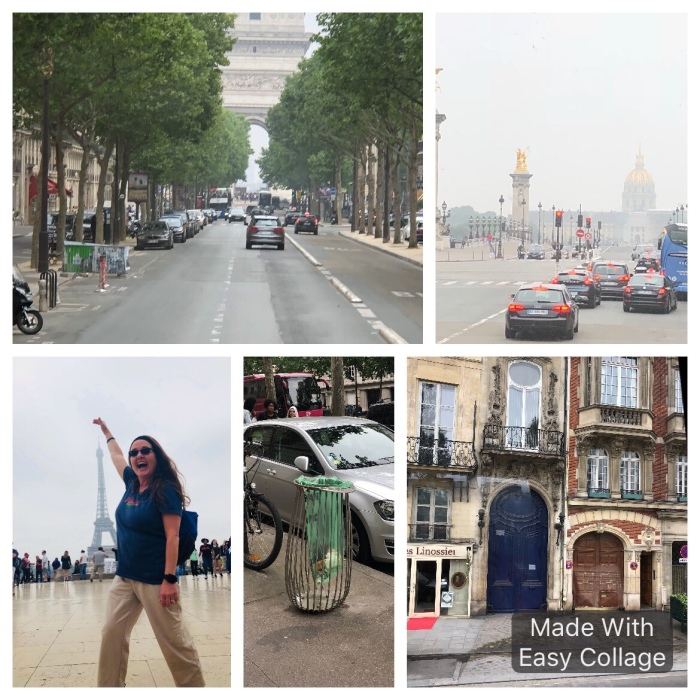 The second part of our day was a tour of the Palace of Versailles.  This place is amazing. Once a mere hunting lodge, Louis the XIII decided that he wanted it to be his residence, so he expanded it to the size it is now- a palace of 2,300 rooms! It remained a palace until The French Revolution. During the Revolution, much of the art was stashed in the Louvre. Once the war ended, the art was returned to Versailles, which, for a while, was a storage facility. Eventually, Versaille transitioned into it’s next and final phase: a museum.

Before we began our tour of the garden and the palace, we went to lunch at a little outdoor cafe next to the Palace. I ordered the French Onion Soup and it was perfect. After lunch we got ice cream, and headed to tour the gardens. It was 120 degrees (hyperbolic- yes), but I was eager to explore. 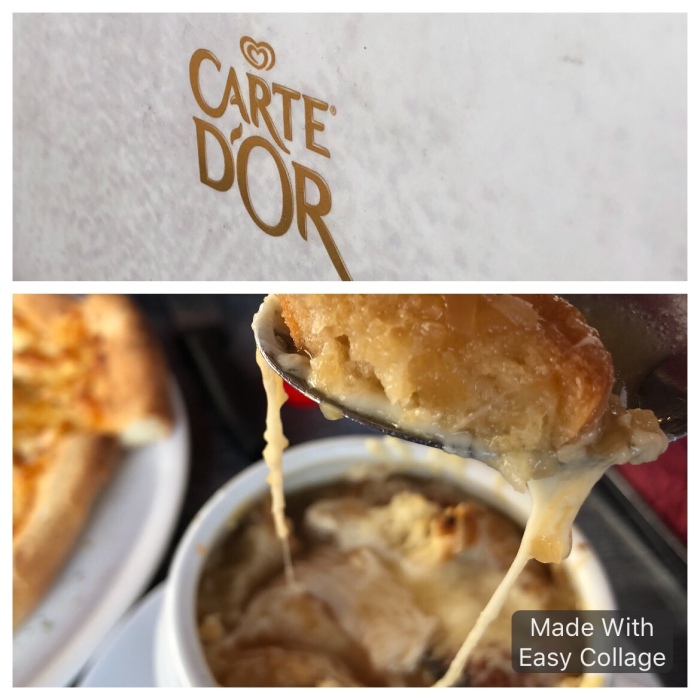 When we walked toward the gardens, I honestly had no preconceived notion about what we would see. I knew that there would be vast gardens, but certainly didn’t realize that they would span as far as the eye could see. The gardens were immediately surrounding the Palace, and the park stretched back from the fountain for what seemed miles.  Apparently, Louis XIV was so proud of the gardens that he even welcomed the public in to enjoy them.

The fountains, which were not turned on when we were wandering through, had all sorts of interesting statues in the centers. My favorite was the angry fish… probably because it is almost gargoylesque! The gardens contain 221 works of art, making it the largest open air sculpture museum in the world, according to the Chateau Versailles brochure.

Inside, the rooms are clad in beautiful art, with busts and full figure statues at every turn. The Hall of Mirrors was not only beautiful, but also was cutting edge. The idea of using mirrors along the walls of a room was originated at Versailles. It enabled them to use dim lights, and those lights reflected in the mirrors to light the room.

After Versailles, we headed back to the city to enjoy a river cruise down the Seine River. Travel mate Stephanie skipped the Versailles experience to meet up with her cousins. She texted me to ask which dock we were meeting at, and I asked Simon, who said it was directly under the Eiffel Tower, and added, “It is blindingly obvious. Even an amoeba from Saturn could find it.”

She found us, and said a teary farewell to relatives she doesn’t see often enough.

After a disappointing cruise down the Thames in 2017, I was not expecting much from our evening cruise down the Seine. I was, however, pleasantly surprised by the views and experience! The cruise was amazing! It was a gorgeous night, and local Parisians were lining the river bank enjoying wine and cheese. These locals waved to us as we passed by, and the students on board waved and even got a “wave” going after going under each bridge. 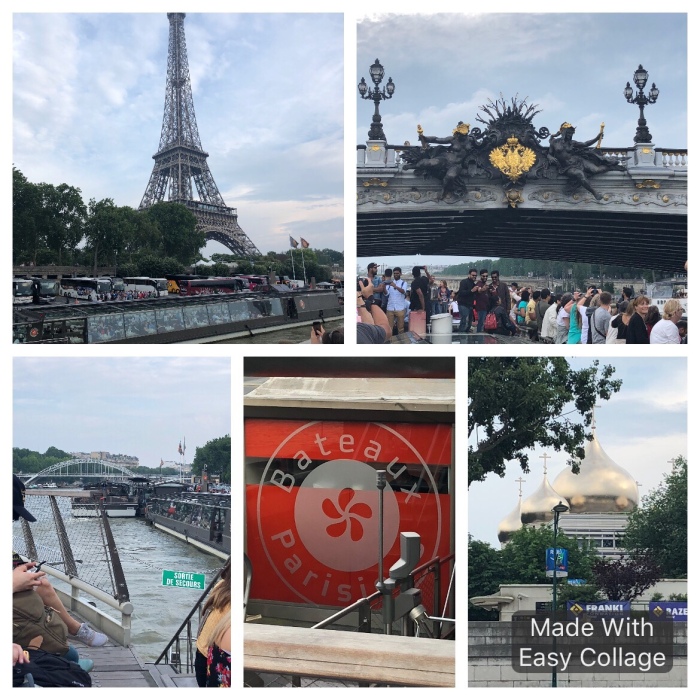 This video shows the excitement the kids had on board the river cruise! What an excellent part of our adventure!

Our hotel was far from convenient to the city… it was located all the way out by Euro Disney. The check-in process was a complete nightmare and took well over an hour, but Simon, our guide, kept his composure and didn’t give up until we were all taken care of. The view out our hotel window was really nice, and the windows opened all the way, so we slept with the fresh air of France filling our airways… (Brooke and Donica, anti-bug people, finally gave in and enjoyed the fresh air after realizing there was no working A/C).  There were several restaurants within walking distance of this hotel, one that sold me a delicious crepe after 11:00pm! Crepe avec sucre et beurre… DELICIOUS!

The next morning we headed to the Louvre. Since this would be my third visit in three years, I was determined to find new art to appreciate. I wandered and found all sorts of works that I had not noticed before. The Death of Cleopatra was one that really stood out… what a shocking piece when you focus in and realize that it is a snake biting her nipple. Not sure there’s much realism in her expression- I don’t think a woman would be so calm in that instance… Was it that women had to hide their emotions? Never let on what sort of pain you might be hiding? Or was it that the artist thought there might even be some sort of pleasure here? The title, however, reminds us that Cleopatra WAS killed by a snake bite, so this is really a sad piece. 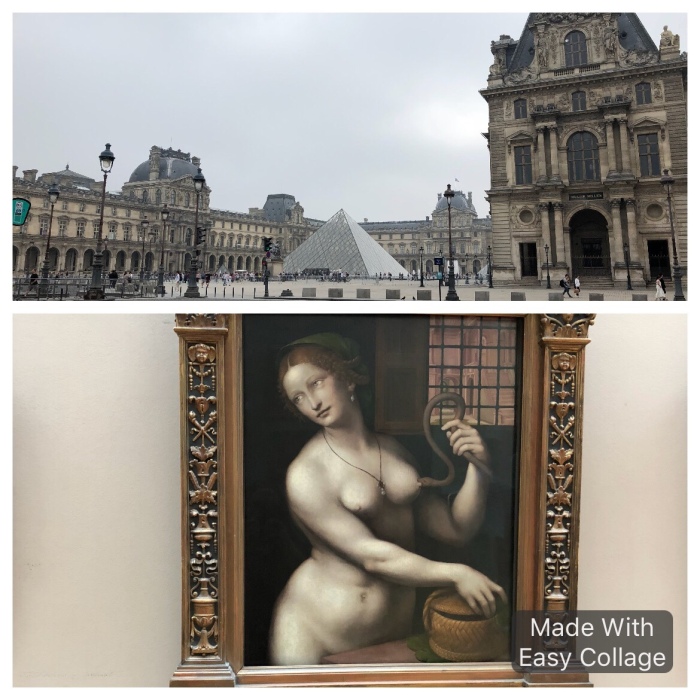 I also enjoyed taking a closer look at the The Department of the Arts of Africa, Asia, Oceania, and the Americas. The sculptures represent the thoughtful nature of the ancient civilizations. Not only do they seem to represent thinking and focusing, but they also represent a need to understand how things work. Truly fascinating.

Of course no trip to the Louvre is complete without beholding the Greek goddess Aprhodite, better known as the Venus de Milo  (the woman with no arms), and the Mona Lisa. The middle statue below is La Pallas de Velletri- a statue of Athena. This one is a famous replica of an original from Naples, Italy.

We had lunch in a wonderful cafe- Le Marmiton de Lutece. I had a three-cheese fondue that absolutely melted in my mouth! We sat outside and enjoyed the people watching and the atmosphere. I snapped a photo of the inside when I went to use the toilets (never called bathrooms or rest rooms). 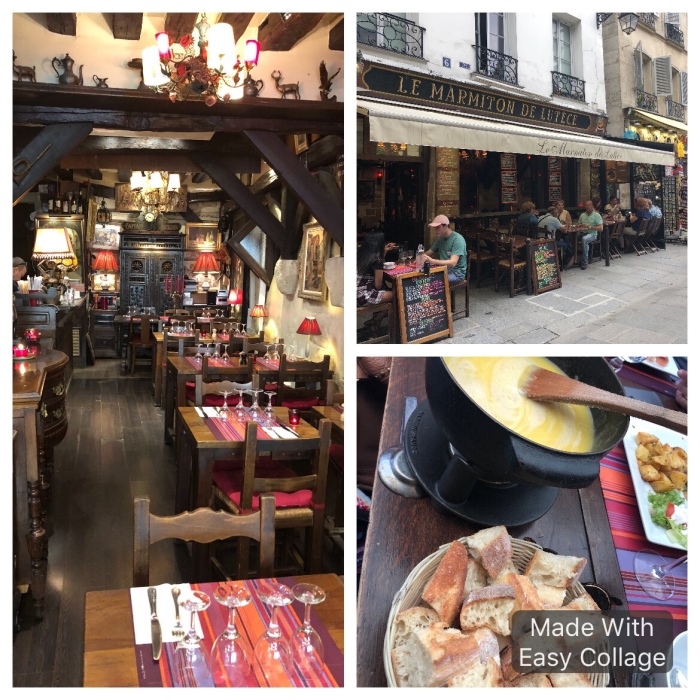 The toilets seem to always be found in the cellars at the bottom of tiny, often winding stairways… 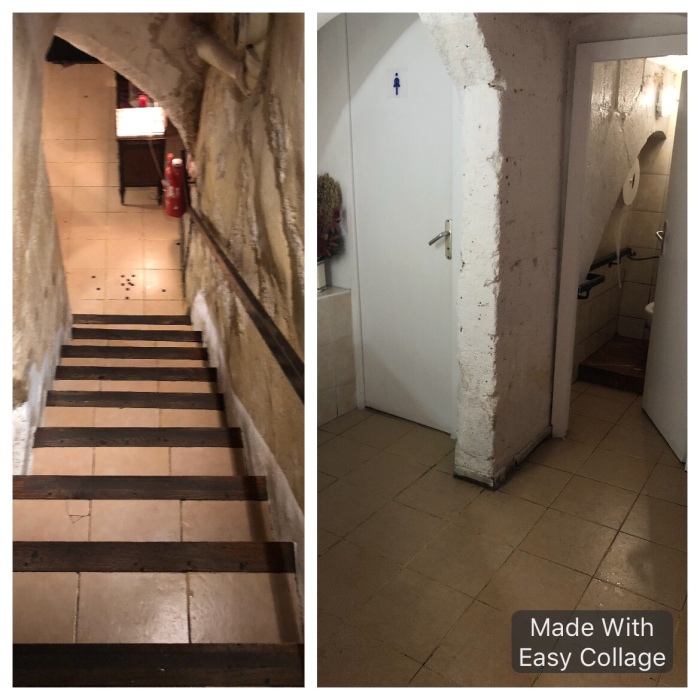 One of my last highlights in Paris was a visit to the historic “Shakespeare and Company” bookstore. There was a line to get in, and I enjoyed a well-practiced accordian performance while I waited. Inside, I found lots of interesting selections, and really wanted to bring home the book detailing the history of the store, but my brain went back to the weight of my suitcase and the struggle I had getting it onto the train. In the end, I came out of the store empty-handed… 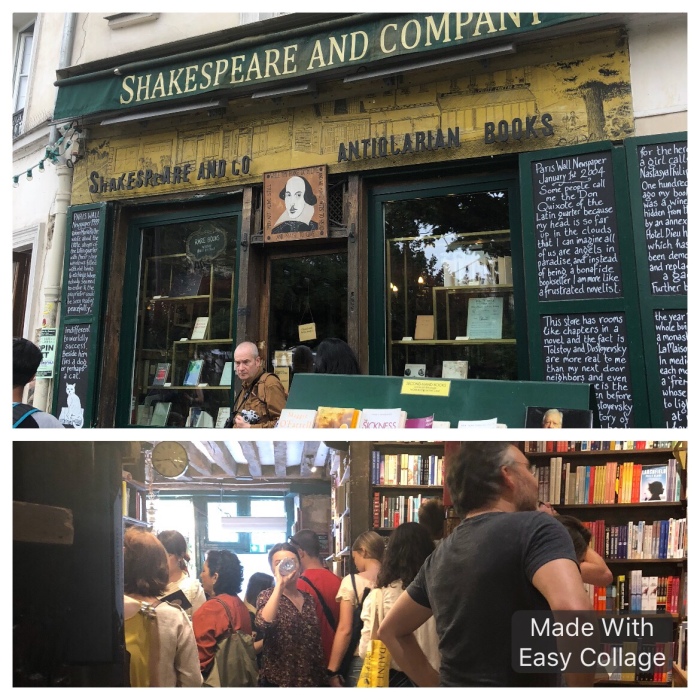 We met back at Notre Dame to meet up and board the bus that would take us to Italy. 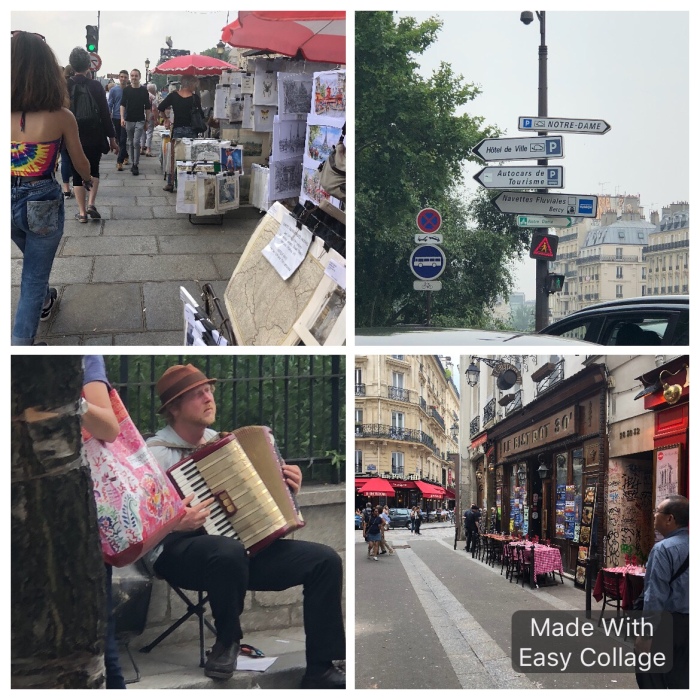 Our train to Milan was cancelled due to yet another Paris strike. (My train was cancelled due to a strike in 2016 when we were headed to Barcelona, but that year they rerouted us via airplane.) This year, we were assigned what would become the world’s longest bus ride. It was an overnight ride, so we needed to sleep… but when that bus pulled into the train stop in Milan, Italy, no one on board had more than a couple hours… Simon was quick to tell Stephanie to “stop faffing”, and the bus driver had to stop every two hours.

Au Revoir, Paris… until next time!

Next up: A Taste of Italy…