The plane landed in Shanghai, and we met up with our new tourguide named Erita. She told us all sorts of interesting things about her family on our way to downtown Shanghai. Her Chinese name was actually Ying Ying, which was a mistake! “My real name that my father gave me means a camp in the army!” she explained. “My father wrote the letters wrong on my birthing card (it was supposed to be Yin Yin) and so I have been stuck with that terrible name my whole life. You need your government ID card for everything, so I can never change it.”

She also explained that her family had three children, which is not common in China. She explained that families are expected to have a son. If they don’t, then they should have another child to try for a son. A third kid was out of the question, but her father was dead set on having a son. Enrita’s parents had two girls. “The first girl was my sister,” explained Enrita, “who they called Nam Nam, which means ‘boys’. I was born next, and they called me (or meant to call me) Yin Yin, which means ‘will come’. So, our two girls’ names meant BOY WILL COME. So, my parents went to another country to have another baby. They had a boy. But when we came back to China, they had to sell everything they owned in order to get my little brother an ID card.”

Our first stop was at the Shanghai World Financial Center- the tallest building I’ve ever been in. At just over 1600 feet, it is ranked the 10th highest building in the world. (The Shanghai Tower, right across the street, is the 2nd highest building in the world at 2,073 feet but we weren’t invited up in that one!)  The World Financial Center Building is nicknamed “the bottle opener” because it’s top has a giant square cut out of it making it resemble a bottle opener! It was a hazy and smoggy day, but at least we could still see ourselves rising above all the “smaller” sky scrapers. It was honestly so far up in the air that I felt a bit woozy. 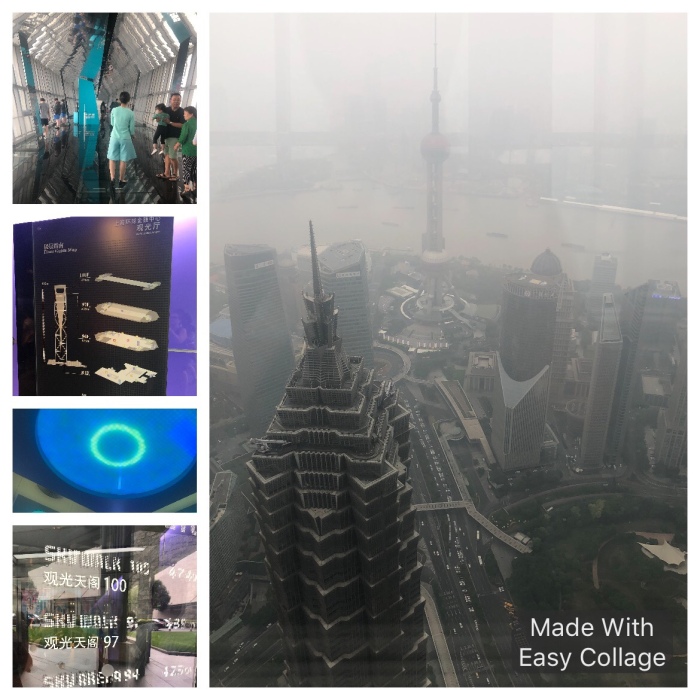 After the tall buildings extravaganza, we were dropped off in a popular shopping area along the famous Nanjing Road. I wandered looking at interesting things…Like giant wall advertisements like the one below featuring a woman holding a giant shrimp on her head. I stood there for a little bit playing a game I like to play- “Caption This!”  I came up with a few, but nothing really good. (Bury yourself in our shrimp?) (You never know what you’ll find in our sticky rice…)

I also stopped to stare at the at the scaffolding that was constructed along one street’s building. It was made of STICKS! Literally! I couldn’t believe that it was honestly going to hold human construction workers! 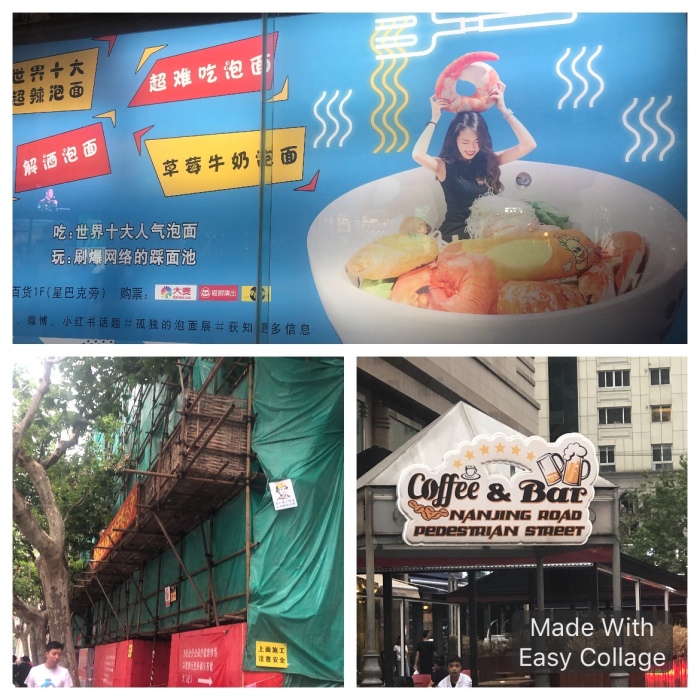 I continued to people watch and see the sites. I found it comical to see a giant Apple store immediately across the street from a giant Samsung store.  Over all, this shopping area was a very modern area with some heavy American influence.

Dinner was at a nice restaurant where we tried some new things including some sort of octopus, and some meatball soup. We were poured one glass of water, and after being turned down for a refill, I felt like Oliver Twist! “Please, sir, can I have some more?” 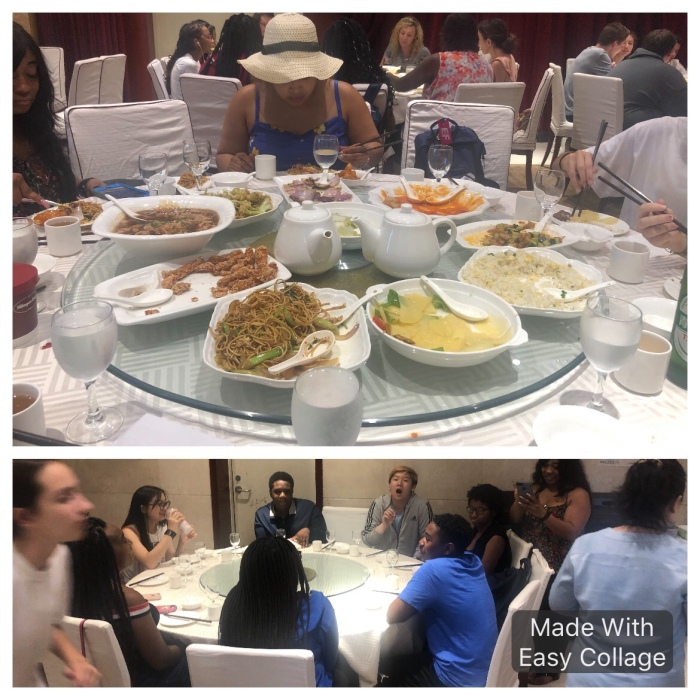 After dinner we headed to the exciting Shanghai Acrobatic Troupe Performance
at a theater on Wu Ning Road. I thought it would be a night of flips and dance, but I was wrong! This night was a show of balancing acts, magic, comedy, and even some mild body contortions!

The lady below had uncanny balance. I have to wonder how long it took her to perfect her act??

The next act was a magician! It was so much fun to watch magic live!

It felt like I was in the audience of the Chinese version of America’s Got Talent! 🙂

The next morning, we got up for breakfast at our hotel, and the options were interesting… duck and congee were the highlights. Congee wasn’t my favorite. I believe it might be called “gruel” in other countries, but it is some sort of rice porridge.

On the way out for the day, we passed lots of homes in Shanghai. Most of the people live in high rise apartments, and everyone hangs their laundry to dry outside their windows.

Our first stop of the day was at the Jade Buddha Temple.  This temple was breathtakingly beautiful, with its enormous Budha statues. In one of the rooms, there were four Budhas. According to our guide, each represented the four animated mountain peaks from a Buddhist legend. The peaks had emotions like humans. “Budha can bring good luck and fix the soul of dead relatives,” explained Enrita, ” and he is often depicted sitting on a lotus plant, because it is a beautiful plant that can grow in dirty water.”

The temple had many people praying and burning incense. There are over 100 monks who live in this temple. “They pray and also make sure that the oil lamps next to Budha don’t go out,” said Enrita, “because if the light goes out- Budha dies.”

The golden woman in the photo below is Kariteimo, considered the Goddess of Loving Children. She only got that title, however, after learning from the horrible things she did. According to our guide, she had 397 children, and only three of those were boys. She was a selfish woman, who would steal other people’s children and kill them and feed them to her own children. The gods, however, finally punished her by stealing one of her precious children. At that point, she finally realized what it felt like to lose a child, and she never ate another kid. Goddess of Loving Children. Hmmm… 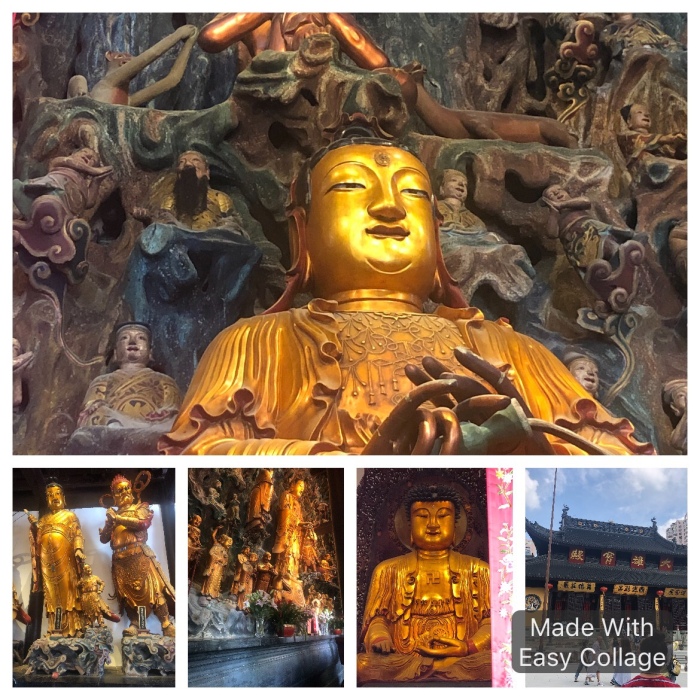 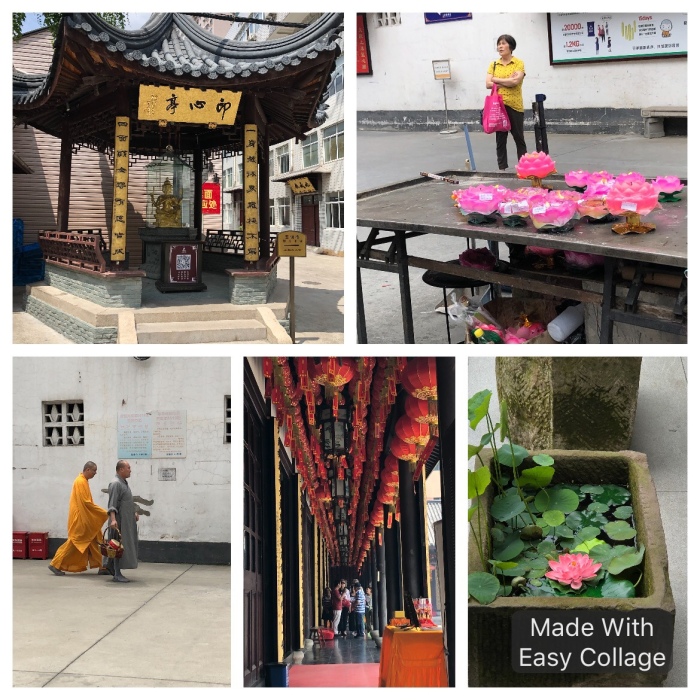 Our next stop was at the Silk Factory. Here, we were given a detailed explanation of how the silk industry began followed by a demonstration of how the silk is made from the cocoons of the silk worms.  I have never been versed in how silk was made, so this was really interesting. Perhaps the most interesting is the fact that not one bit of the silkworm goes to waste. They use the cocoon shell for the silk, and they use the pupa for facial cream. (Some people even eat the pupa if it is deep fried.) They even use the “droppings” from the worms- as a filler for pillows!

The video below shows the machines that take the cocoon and manage to pull 1000 meters of string from it!

The process of removing the silk is fascinating. It is pulled and stretched, then wet down, then stretched some more!

The costs were fairly reasonable for comforters and pillows made from the authentic Chinese silk.

I left the silk factory more knowledgeable about a process that began thousands of years ago. I didn’t purchase a big silk blanket, but I did get a change purse and 3 silk kimonos for wine bottles. 🙂

Our tour director brought us next to a giant grocery and trinket store.  It was fun to look at the different products and the designs on the packaging.

The next few hours were spent in the “original” China Town! 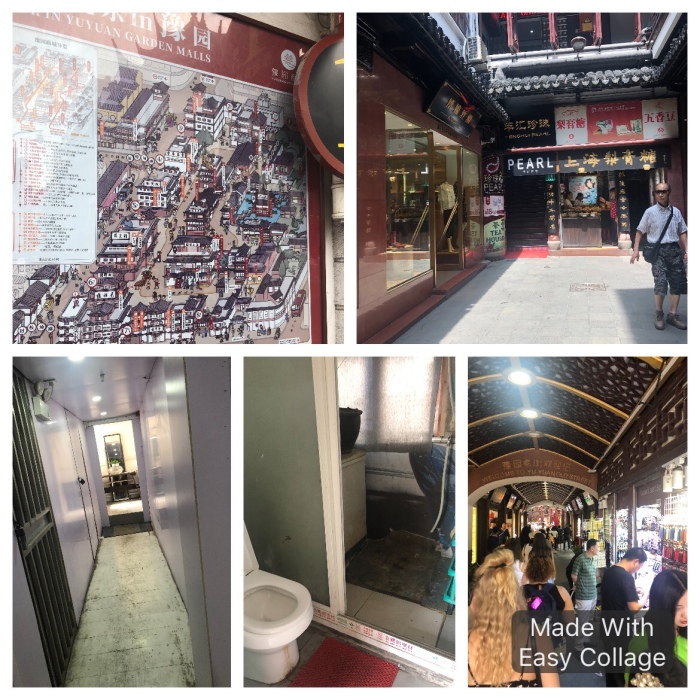 We enjoyed walking through the marketplace, checking out loads of food options. I enjoyed a Chinese Pizza- which was fried with green onions and powdered cheese! It was chewy and really hit the spot!

There was a great selection of local art and I enjoyed watching one artist practice his craft: finger tip painting! The architecture of the buildings in this area were exactly what you would imagine China to look like. Really so beautiful.

Just adjacent to the market was an ancient Chinese garden. Our guide said that this garden contained 600 different plants and flowers. The ancient gardens were designed to have nature in perfect harmony with the man made buildings to achieve balance. 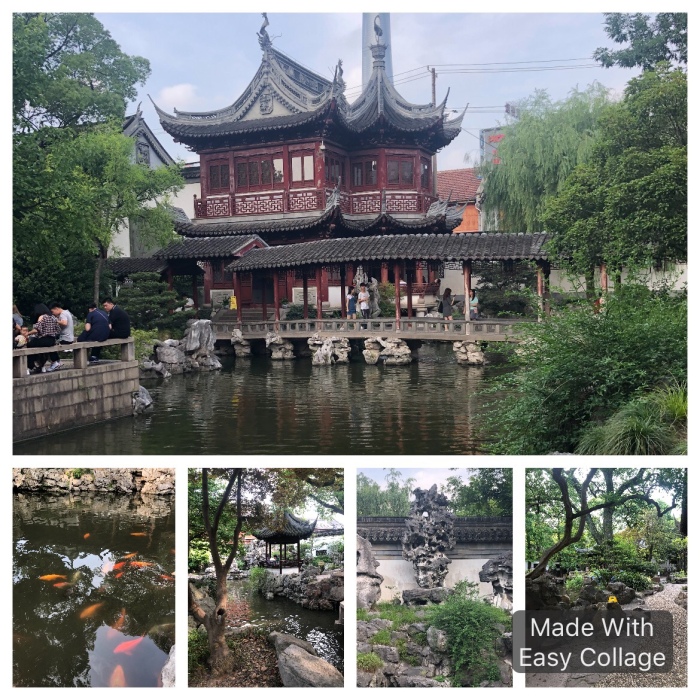 The giant dragon was unique to see in a private garden because dragons were only allowed to be displayed in the homes of emperors. Occasionally, as was the case of this garden, the emperor could grant permission to a person of clout.

In one part of the garden there were two trees planted next to each other. “These trees are referred to as Old Husband and Young Wife,” said our guide. The Ginko Biloba Tree was 400 years old and the Magnolia Tree only 100! 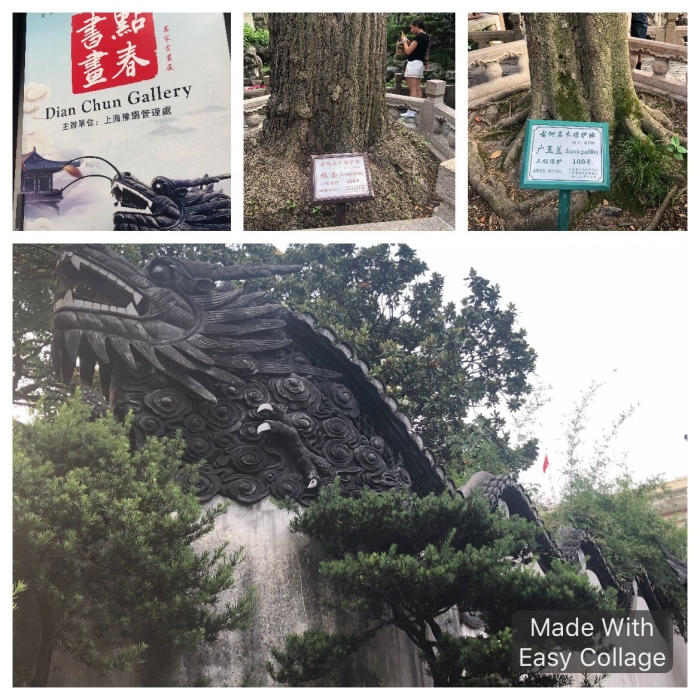 I enjoyed the serenity of the reading room surrounded by the brook and the trees. The steel lion in the photos was 700 years old. 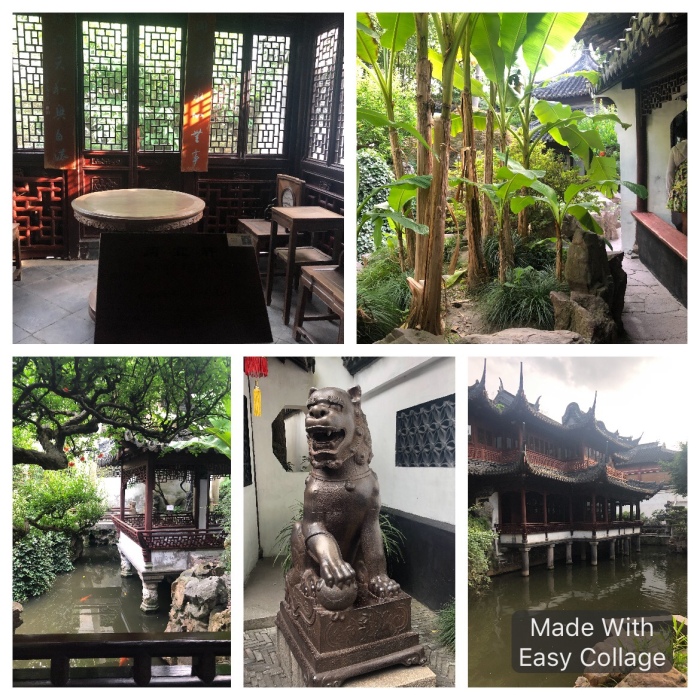 We walked for quite a while to get back to the bus after visiting the Garden. I enjoyed stolling along and taking photos of some of the interesting and beautiful things I saw. One thing that struck me was the brooms that they used to clean the street- all made of twigs! 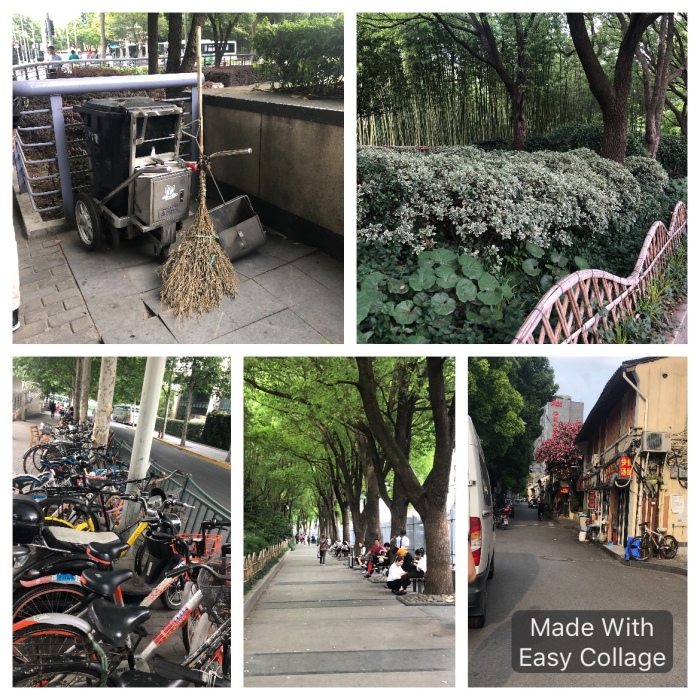 After eating our final dinner in Shanghai, we headed to the riverbank area, known as the Bund,  to hop on a river cruise down the Huangpu River. We paid extra to get seats on the top deck of the ship, and it was so worth it! The colors were truly awesome! Our tour guide said, “Shanghai is a beautiful woman who wears too much make-up at night.” 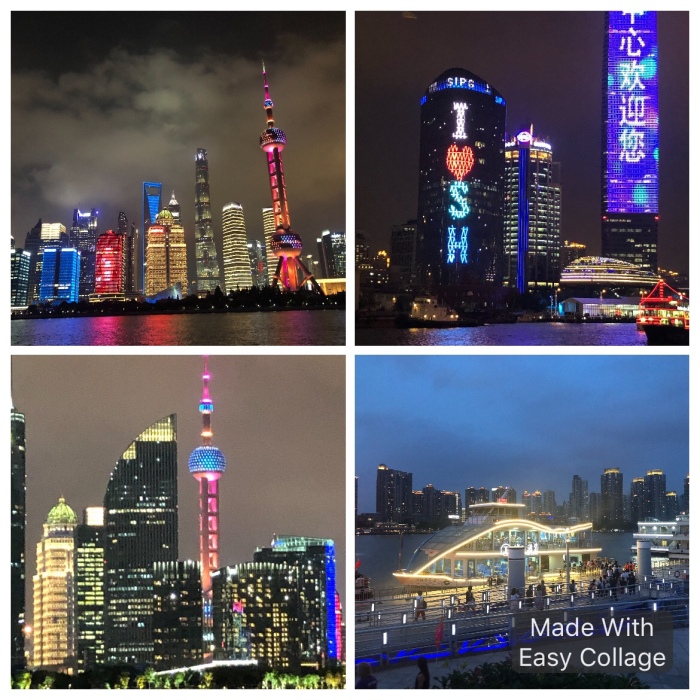 What an amazing end to this Chinese adventure. I enjoyed this trip tremendously, and found that China is not the oppressive place that many Americans seem to envision. I found the people to be happy and no one seemed to be lacking for anything (aside from unlimited drinking water!?).

I learned a few new words in a language I new nothing of, and I even understood how to determine the worth of 100 Yuans.

I can’t wait for my next adventure. The wanderlust in me is real.