I woke up this morning and headed to breakfast. Wow- was I impressed! They had everything anyone could want on numerous separate stations! Cheeses, meats, fried eggs, boiled eggs, scrambled eggs, and even hard boiled eggs… and fruits, yogurts, and homemade breads that rivaled a bakery. I ate with a few teachers, and as I cut my kiwi into quarters, I surveyed the group as to whether or not they eat the skin of the kiwi. Every single one of them said no. And I think they decided that I’m a bit of an odd duck. 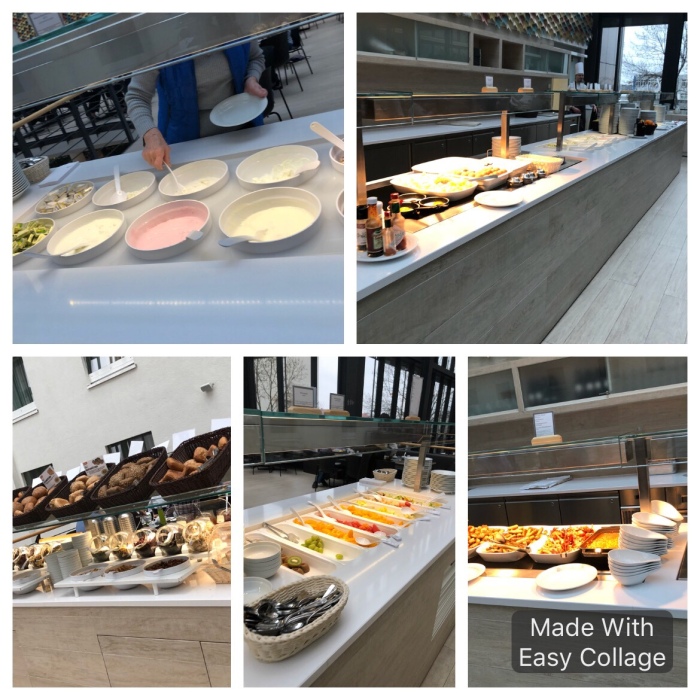 I did waste two different cups of God only knows what on the coffee machine which didn’t have English subtitles. I finally clicked the golden button and got some mega-bitter coffee that was sure to wipe any last fatigue from my body!

After breakfast I had a two-hour training class, and then we had ten minutes to bundle up and load the tour bus. And I was ever so thankful today to have so many cold gear articles… because it was 30 degrees with a few hours of snow! (One guy from New Mexico called it blizzard conditions!)

Our first stop on the bus was at the historic East side gallery. No one visiting Berlin should miss this- even if it is below freezing and windy. This gallery is actually a series of murals painted on a remaining strip of the Berlin Wall, murals which were put up to celebrate all that was joyous and peaceful and free about the Wall coming down. The Wall has 101 different paintings- some very abstract, others more pop art style. One of the most famous is the “kissing dictators”, which says at the top “God help me stay alive” and at the bottom “among this deadly love”. This is, according to our tour guide, the longest outdoor painting in the world. 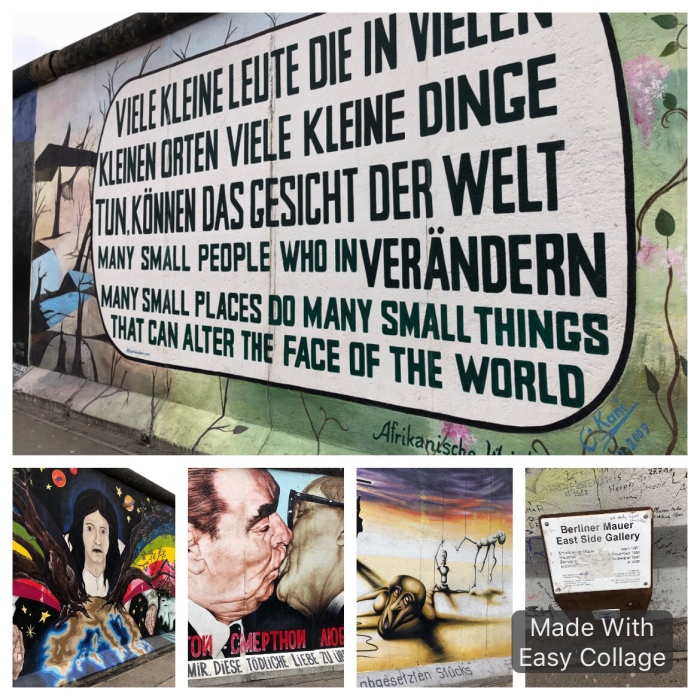 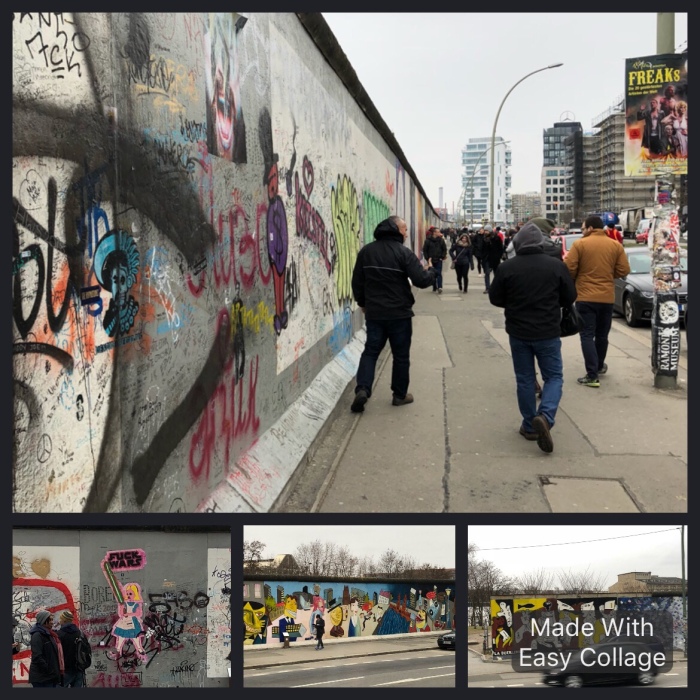 There was a fellow playing his instrument in front of one of the panels… this instrument was like the chitty-chitty bang bang of instruments. It made these funky gurgling, seven-horsepower motor sounds that were not very musical to my ears, yet I was fascinated! I bet I could make one of these?! 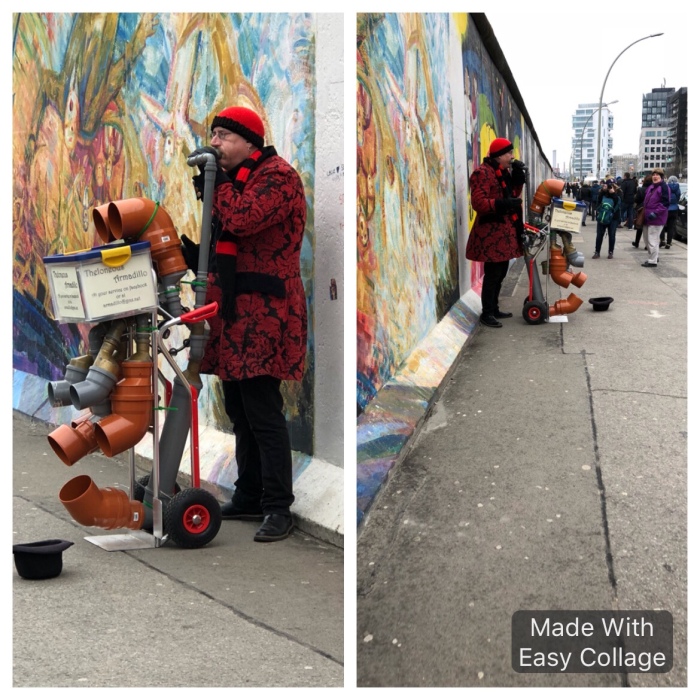 We got to see St Mary’s Church, which is one of the few buildings to live through the war. This church was actually built in 1270, according to our tour guide, who also said that the tower was put on it to make the church appear smaller. All the guides we’ve had stress the lack of interest the Germans have in religion. So much so that, according to today’s guide, 80% of Germans are self proclaimed atheists. “We have in Germany a religion tax,” the guide explained. “But if you sign a paper declaring yourself an atheist- you don’t have to pay it.” Hahaha 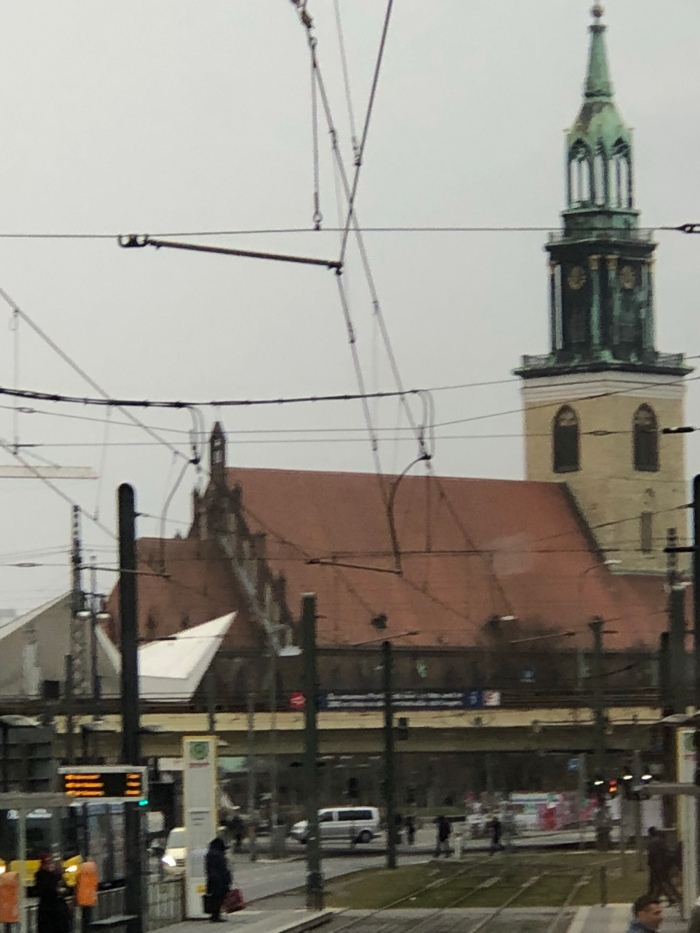 We we made another stop where I visited what must be the most famous chocolate shop in Berlin. In return for free facilities, I bought some chocolate and wowed over the chocolate creations. This Rausch shop smelled like heaven. 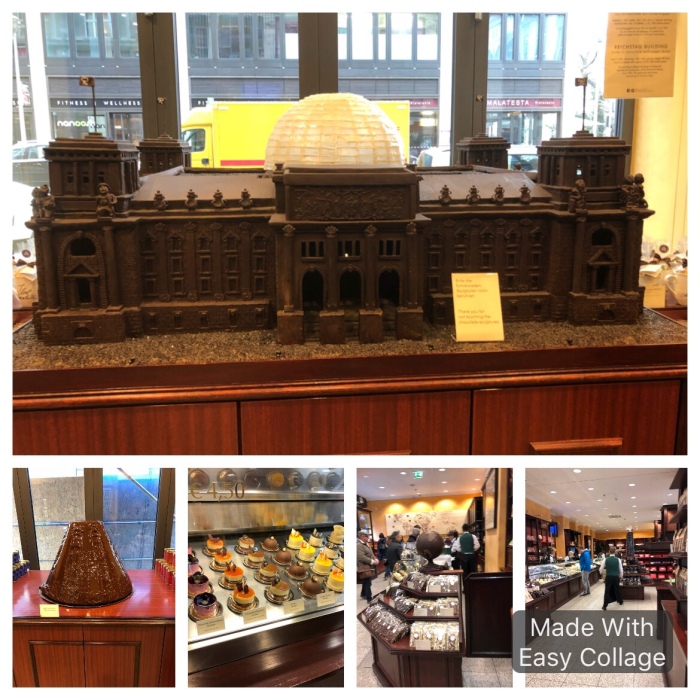 As we made our way to Potsdam, we passed some interesting modern monuments. The one with the curved, spaghetti-like appearance is actually a Kaiser Wilhelm memorial. According to our guide, the locals call it “aluminum worms” or “dancing in spaghetti”! 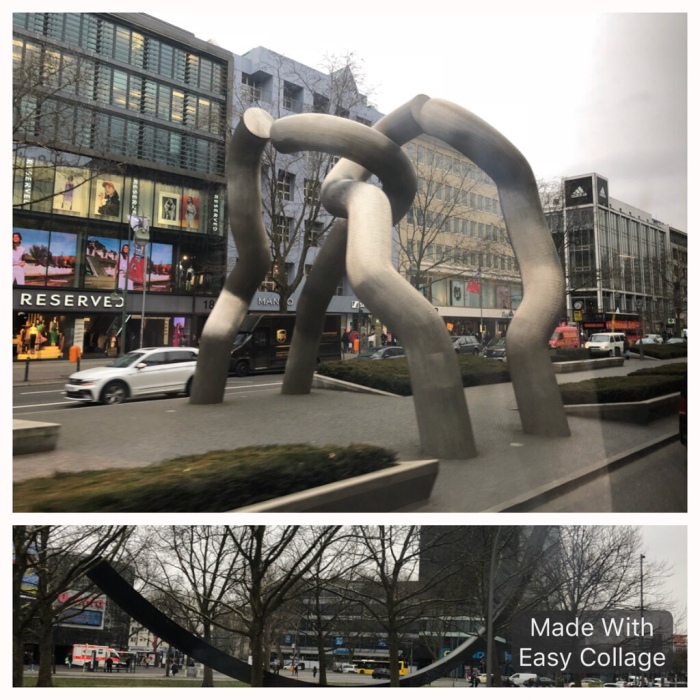 We got a chance to get out for lunch around the corner from the St. Peter and Paul Catholic Church, which was the first Catholic Church to open its doors to the Potsdam community after the war. 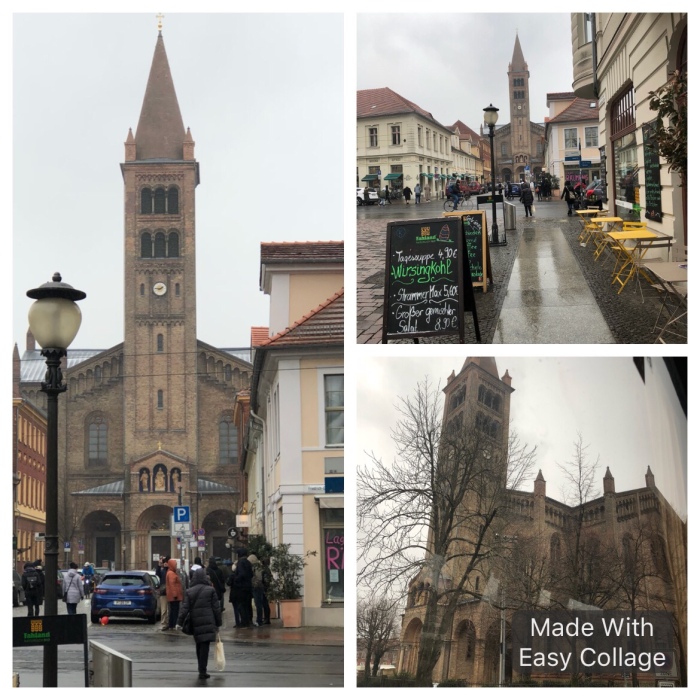 We ate lunch in Potsdam, which our guide explained was “Berlin’s more beautiful sister.” For lunch we made our way down the Main Street in Potsdam and found a local sandwich shop. I had a delicious spinach quiche and they had a free WC (bathroom) which I’ve come to appreciate. 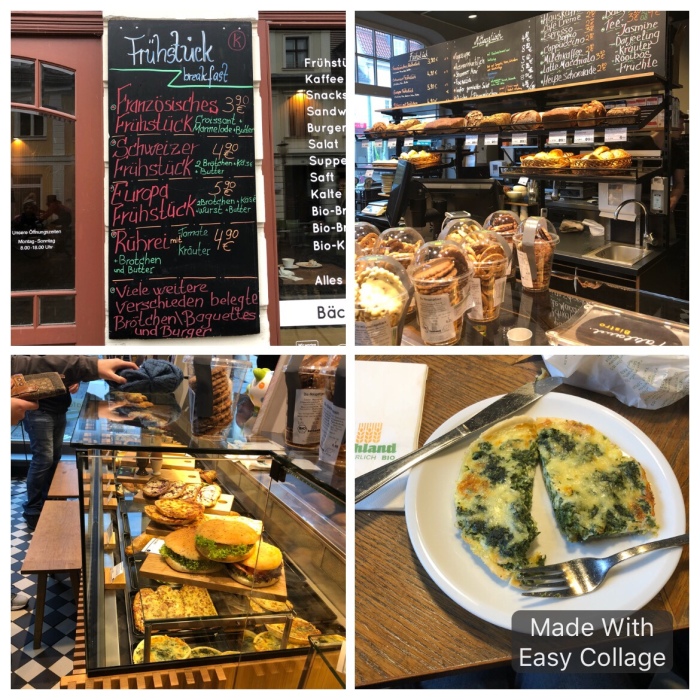 One of the most interesting sites we saw before arriving at the “New Palace” was the famous “Steam Engine” building, which is located along the Havel river. This place was built to look like a mosque, but inside it is home to a mega steam engine. According to our guide, there are 2000 Syrian refugees who come into Berlin each year and go there to pray. What a surprise when they find it is not a house of worship! 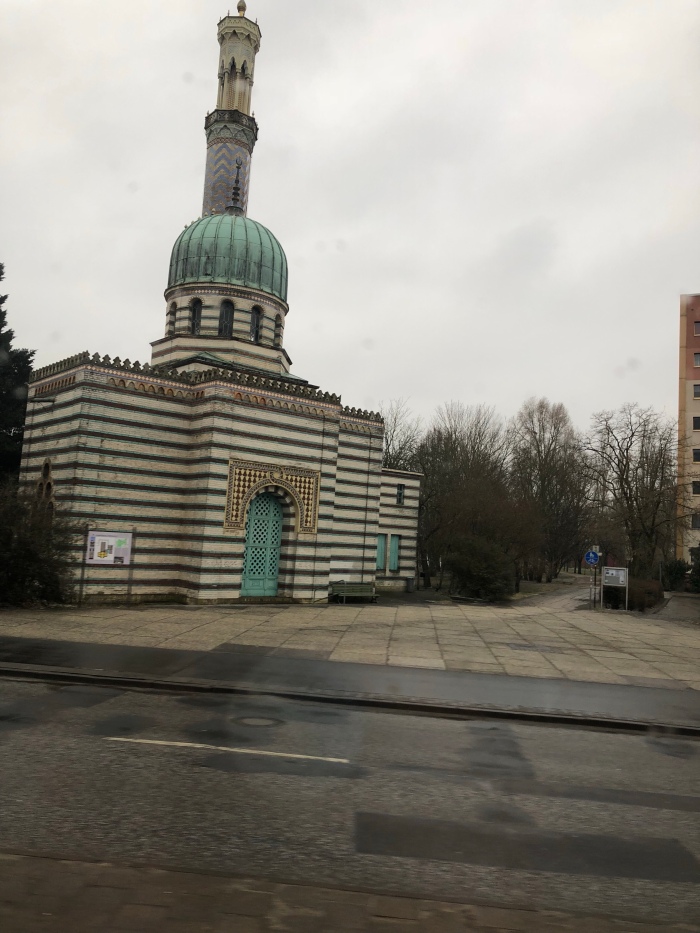 Our next stop was at the “New Palace”. This palace was finished in 1769 and was pretty much a 200-room summer place for king Friedrichstraße II. The rooms were lined with silks, silver, and gold, the floors were cut from the finest marble, and the art was jaw-dropping. Before I include photos of the palace, I want to describe the “not-a-palace” that was across the street. With sweeping circular stairs on the front, this was simply built to be something beautiful to look at- and was, according to our guide, “where the kitchen was.” This photo below is just a kitchen. Freddie’s diner! 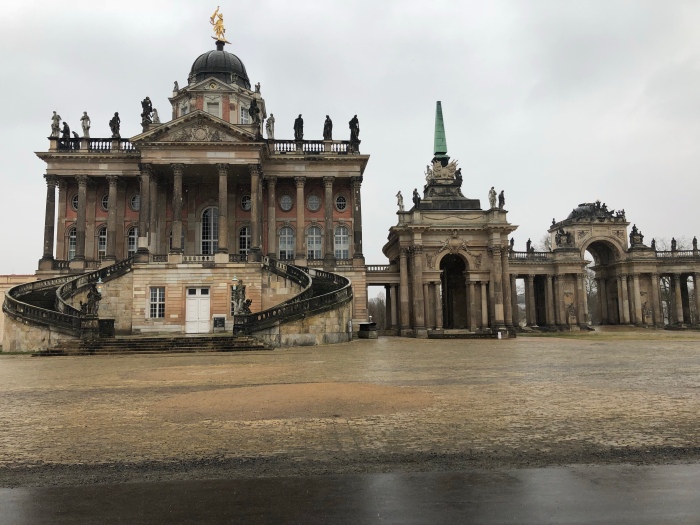 The palace, across from the kitchen, is sprawling and impressive as well. When we arrived, the snow wasn’t sticking, but by the time we left, the grounds were white!

Inside the palace was historic beauty, fortunately preserved; saved from the destruction of World War II. 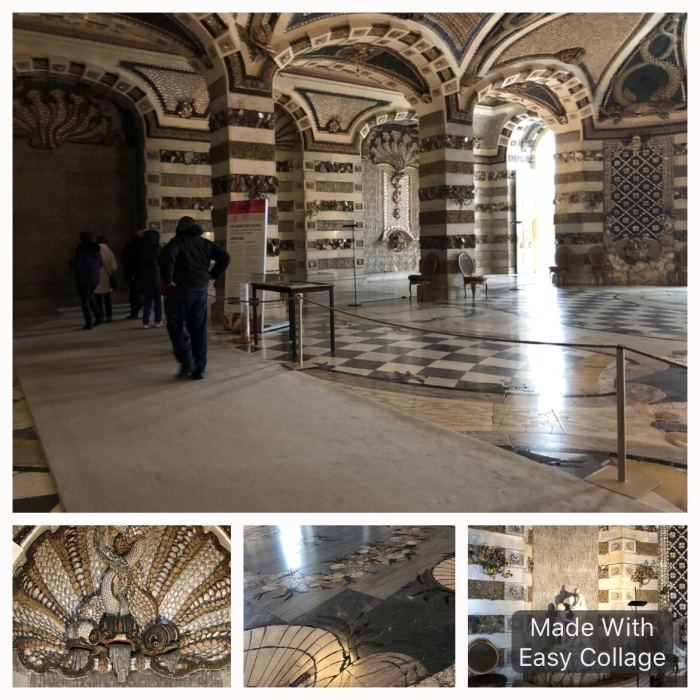 The porcelain chandeliers were the first of their kind, and they all had porcelain musicians built in. Much of the art was inspired by mythology and the caretakers of the palace have even kept the graffiti that was drawn on the walls during the war. 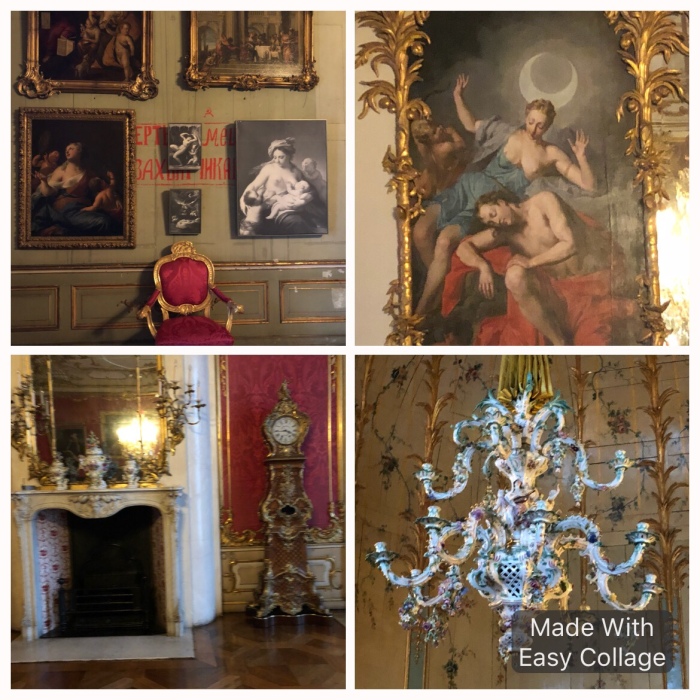 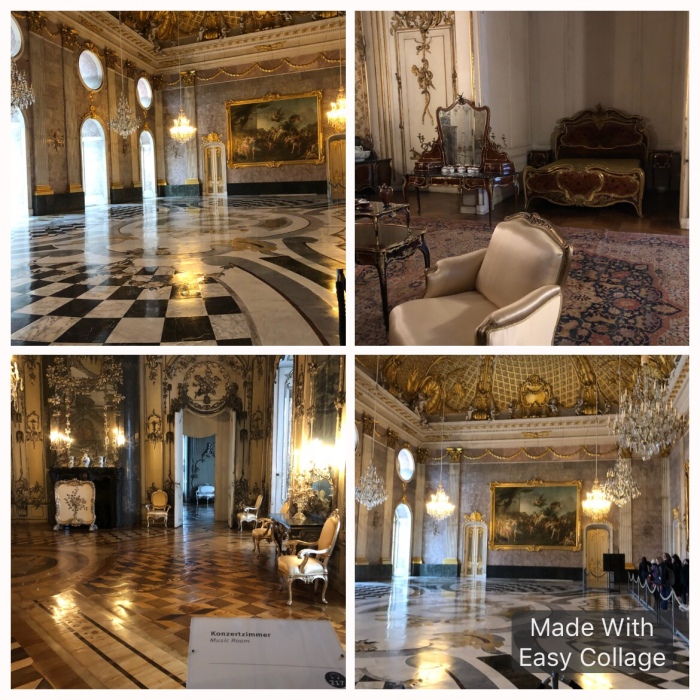 After a potty stop that cost me 70 cents, we were on the bus and headed back to east Berlin. Our next stop, and final tour stop, was the “Topography of Terror” exhibit. The outdoor exhibit is lined with a remaining section of the Berlin Wall. This place is the exact site where the Third Reich housed the SS and the gestapo. Outside, visitors can see the remnants of the cells that the SS used to hold prisoners- those who were tortured endlessly in preparation for their execution. This is why the loathing had to be in this blog’s title. 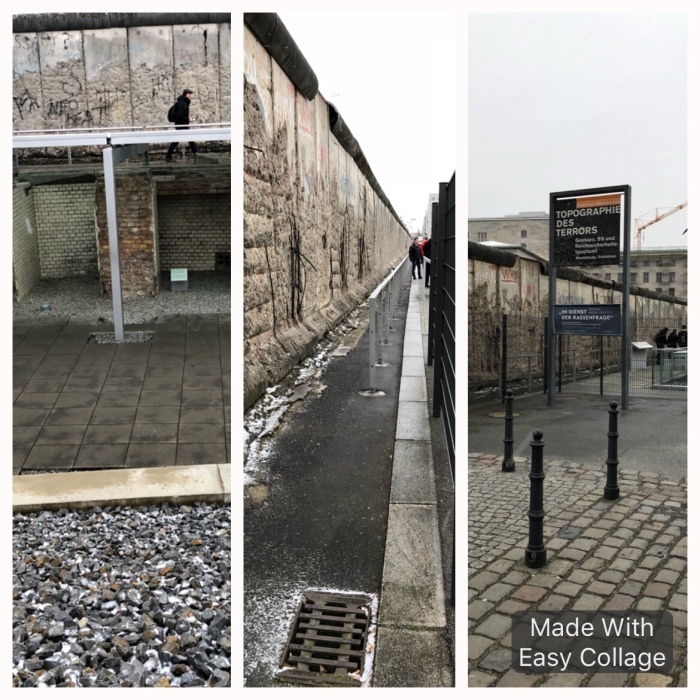 Inside the museum, there are hundreds of photos that depict the historical atrocities of Hitler’s bloody, sociopathic reign. Many of the photos are painful to look at, but serve as a true, accurate depiction of the horrors of the time. 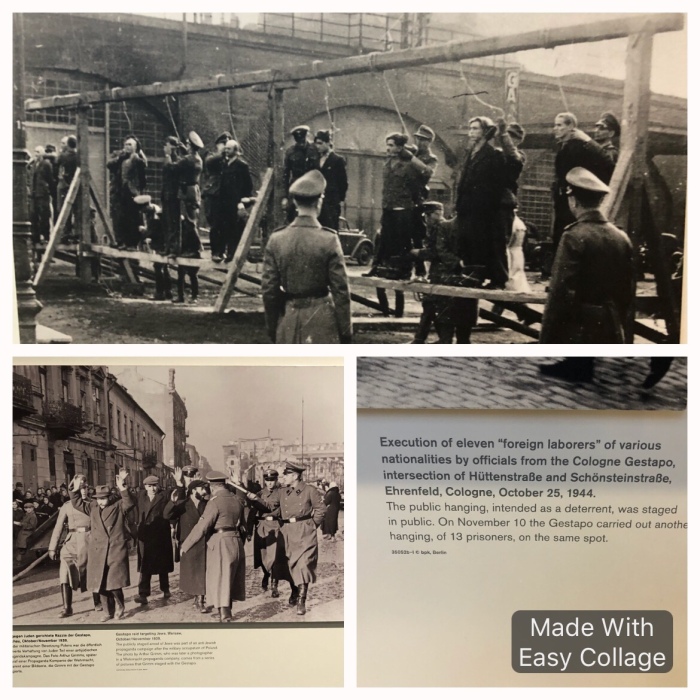 After leaving the museum, we found our way to dinner somewhere near checkpoint Charlie’s. I enjoyed a creamy mushroom risotto and a glass of German wine called Weissherbst. My dinner mates both had schnitzel! 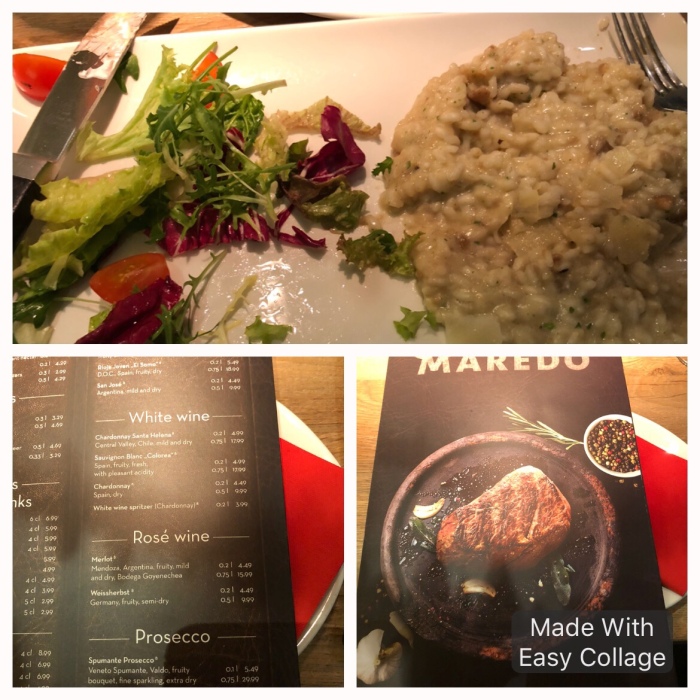 The ride back, without our guide, was comical and I almost felt like what the contestants on the amazing race must experience! We didn’t understand the language, and had yet to fully comprehend the Berlin subway system. With only one wrong train, we corrected ourselves, had some laughs, changed the proper number of train lines, and got back to the hotel! The Estrel hotel, I might add, is really quite something at night! 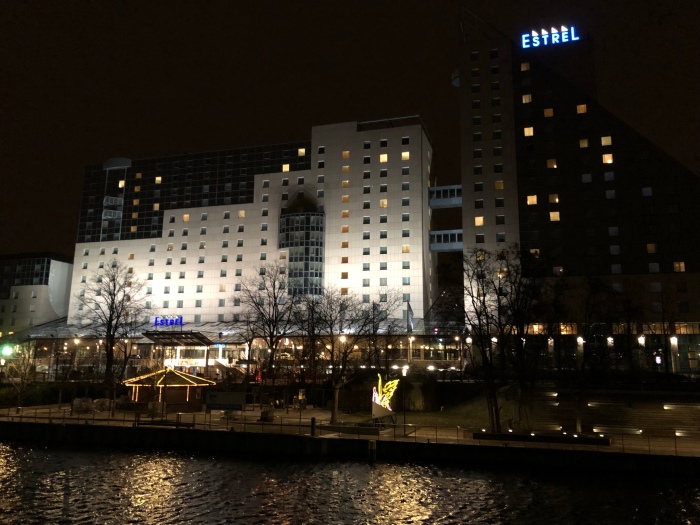 Excited to see what awaits tomorrow- my final day in Berlin!